Shepherds, Foresters and Buffaloes: The Friendly Societies of Aberdare

The Museum’s Church and Chapel case contains one of the most striking displays in the gallery. Among its many treasures is a splendid collection of Friendly Society regalia, medals, collars and sashes.

Friendly, or benefit societies, generally called clubs, are very early examples of the working class organising itself into unified movements through such institutions.

A network of friendly societies developed in the coalfield,

an attempt by the working class to create organisations

which would preserve them from the clutches of the Poor

Law and which brought colour and ceremony into lives

which would otherwise be drab. (Davies, 427) 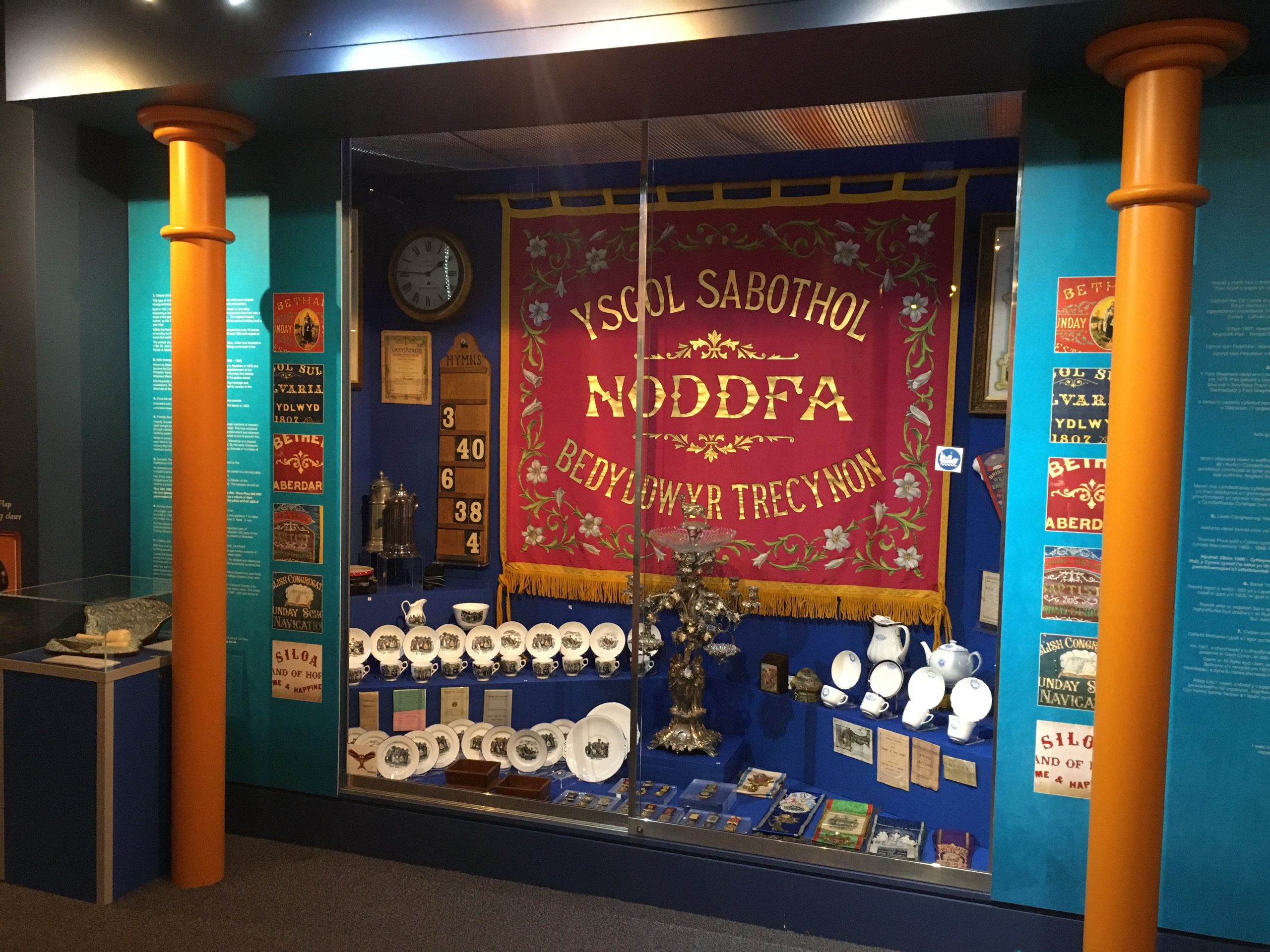 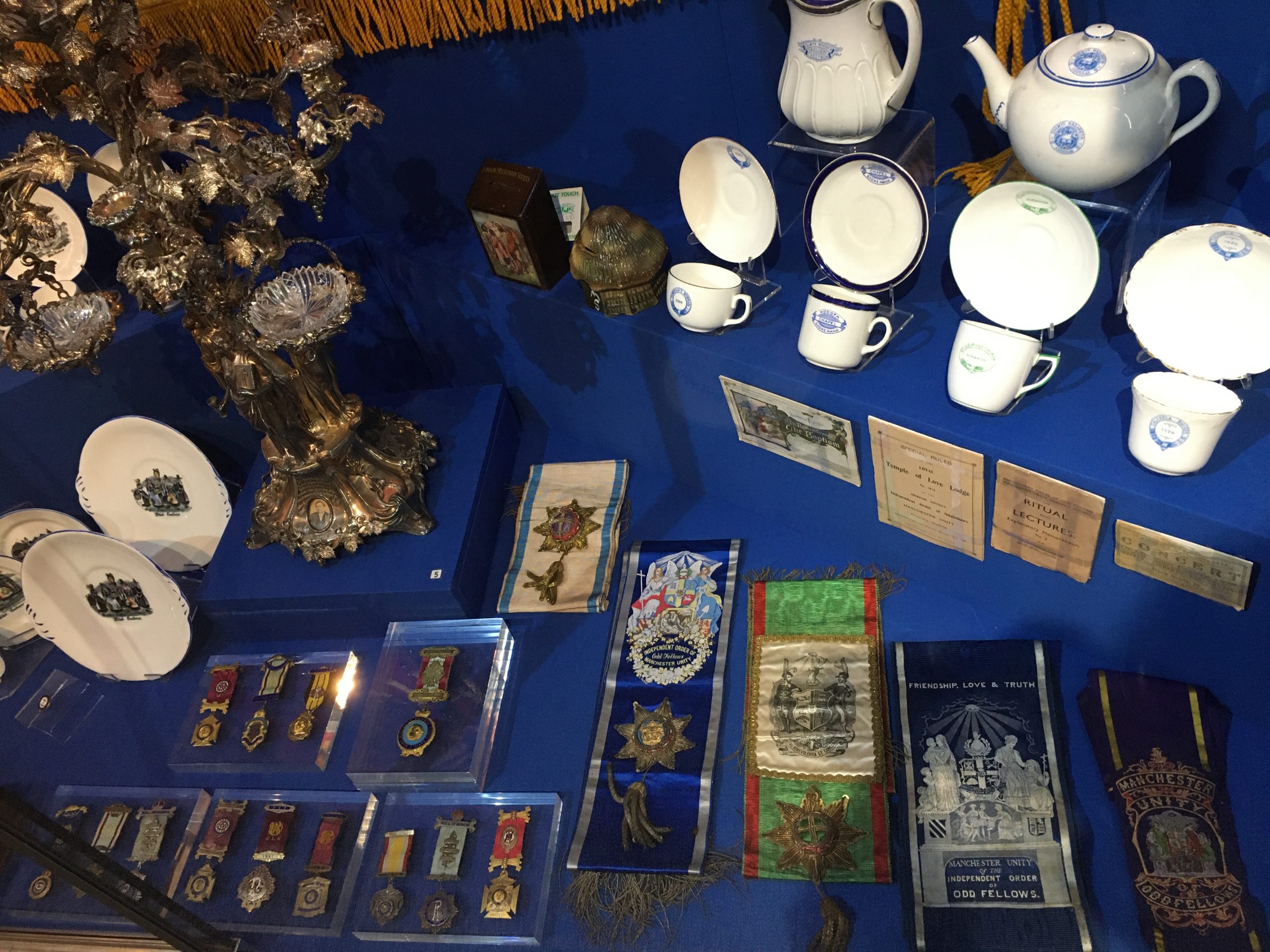 A number of societies had been established in Aberdare by 1832, including two female societies, the Faithful Friends Society of Women, Corner House Inn, Llwydcoed, 1809 and The Female Benefit Society, 1832.

The Baptist Minister, The Rev Thomas Price of Calvaria, who was a member of most of the local societies, revealed in a speech in April 1865 that in 1813 there were seven clubs in the area with a total of 360 members, by 1855 there were fifty-nine lodges [clubs] and 5,162 members. That year (1865) the number of members of just two clubs, the Foresters and the Ivorites, stood at 4,682.

Membership, he said, cost an individual about 25/- (£1.25p) a year, of which 5/- (25p) represented fees, dinners, and other contingencies, so that each member subscribed £1 a year towards provision for accident, sickness and burial.

Price estimated that in total there were then some 9,682 club members who between them provided an annual fund of £9,682 a year on which distressed and incapacitated members could draw.

In addition to the obvious economic benefits, the clubs enjoyed a vibrant social life and they held regular meetings, annual feasts, parades and fetes and galas.

An early reference to a local club activity is to be found in The Cambrian of 18th August 1832.

The most colourful of the societies were the Foresters; this club paraded the streets annually and many mounted on horses, wearing costume imitative of the garb in which Robin Hood’s predatory followers were supposed to have attired themselves.

On the 15th August 1863 the women’s benefit clubs that met at the Corner House, Llwydcoed and the Blue Bell, Mill Street held their usual annual festivals ‘…. Having marched to a place of worship in an orderly manner, they returned to their respective places of meeting and enjoyed a well prepared dinner.’

The societies organised themselves into courts and lodges that usually met in the long rooms of local pubs. Many pubs carried their names and, in Aberdare, there was once a Foresters and Oddfellows Arms.

Other local clubs included the Good Shepherds, Ancient Britons, Alfreds, Druids and the only specifically Welsh society, the Ivorites.

Interestingly, the flags, banners and regalia used by the clubs were supplied by an Aberdare Jewish businessman, Henry Solomon. Solomon was a member of the Foresters.

The Ancient Briton’s also had distinctive ceremonies and dress. In one of its parades replete with a goat, fifty horsemen turned out, many wearing skins of different animals looking like ancient Britons in reality (1883).

Many lodges were named after local industrialists or landowners (Mary Wayne Lodge and Glandare Lodge honouring the Wayne family of the Gadlys Ironworks), and a number of the gentry were individual members. For example, Mrs Thomas of Ysguborwen House and her two sons, D A Thomas MP and Capt Moreton Thomas joined the Tywysog Gwrgant Lodge of Ancient Britons at Trecynon.

Their prominence in the town was acknowledged in the 1885 National Eisteddfod when they led the procession on the opening day to meet and escort the President of the Day, Sir George Elliot MP, from Aberaman House to the Pavilion on the Cwmbach Road. The Foresters led, followed by the Shepherds.

An example of the medals worn at the Eisteddfod by members of local Friendly Societies. 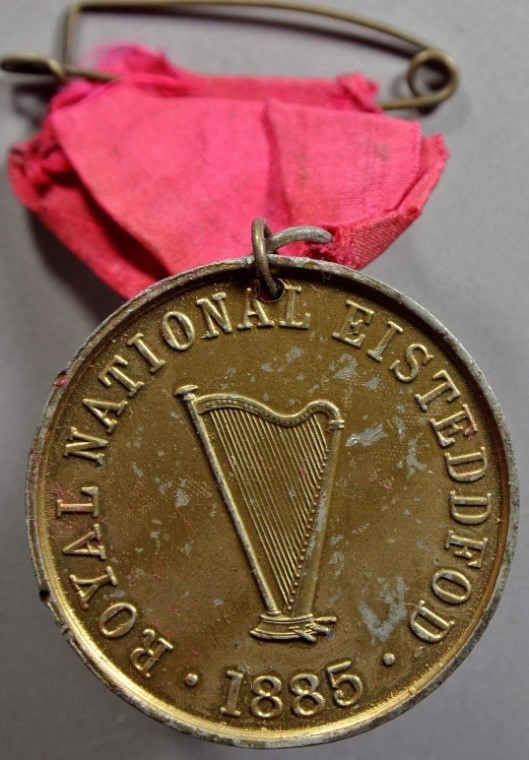 Friendly Societies were subject to legislation and there was strict control of their activities. For example, in 1886 the Registrar of Friendly Societies suspended for a period of three months the activities of the Tregibbon Oddfellows Friendly Society because of violations of the valuation of its assets and liabilities and, in the following year, the Trecynon Friends in Need Society were struck off for serious breaches of asset and liability rules.

As mentioned above, the record for multi-membership had to be held by the Rev Dr. Thomas Price, Calfaria, who in June 1865 was appointed Grand Master of all the Oddfellows of Great Britain. Price was the first Welshman to be appointed to the office. 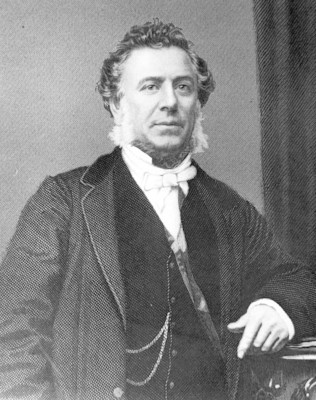 On completion of his year, the 15,000 Welsh Oddfellows each subscribed one penny (5 new pence) to a fund and in October 1866 in recognition of his service, Dr Price was presented with a magnificent silver epergne and candelabra at the Cardiff Castle Hotel, Aberdare. The epergne, made of frosted silver, was designed and made by the Mappin Brothers of London, the Royal silversmiths. This rare and splendid object is also in the museum’s collection and on display in the same cabinet as the regalia. 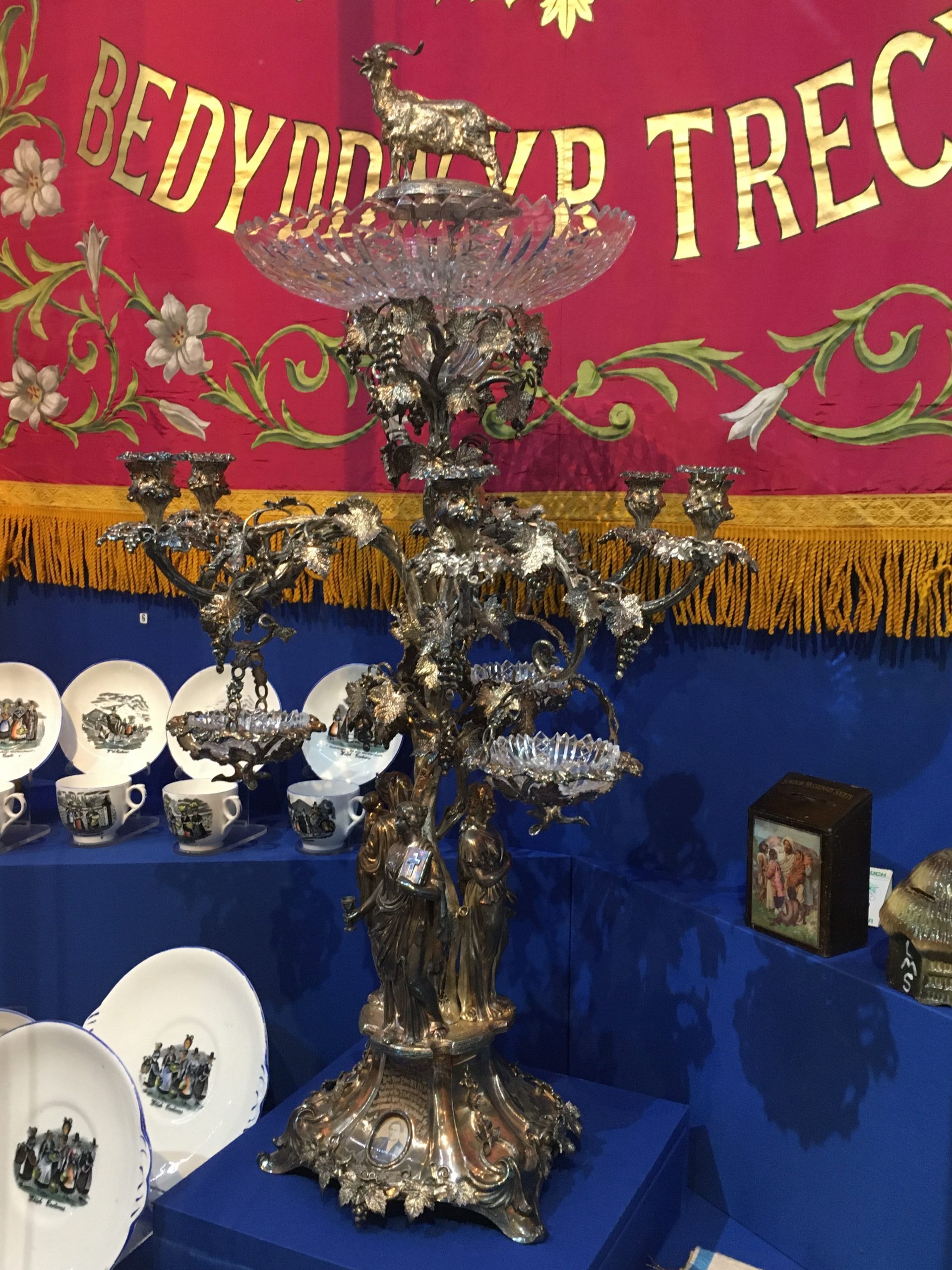 Teeming with symbolism, the epergne is surmounted by a goat, the crest of Dr Price. The goat stands in the centre of a fruit stand which rests on a central column of vines and grapes. Candle brackets and flower baskets (4) branch out of the vines and below are the figures of faith, hope and charity. The base consists of a triangular stand with three panels, the central panel containing a portrait of Dr Price and an inscription.

The Brecon County Times, 3rd November 1866, page 4. The inscription included at the bottom of the epergne.

A second panel bears a series of coats of arms, first of the City of Manchester, where the Order is based, and of Great Britain, then of Order of Oddfellows This is divided into four quarters: (1) an hourglass signifying the fleeting nature of time, (2) Crossed keys signifying that members had a casket of knowledge and the keys were the means of entry, (3) A beehive for industry and (4) a Pascal lamb for innocence. In the centre is a cross bearing a rose, shamrock and thistle and a horn of plenty and dove of peace.

The panel is also engraved with a globe, a hand and heart, signifying the world-wide friendship of Oddfellows, and over these the all-seeing eye of providence. The third panel has the arms of the ancient Principality of Wales and other Welsh emblems. This emblem can also be found in a sash in the museum’s collection. 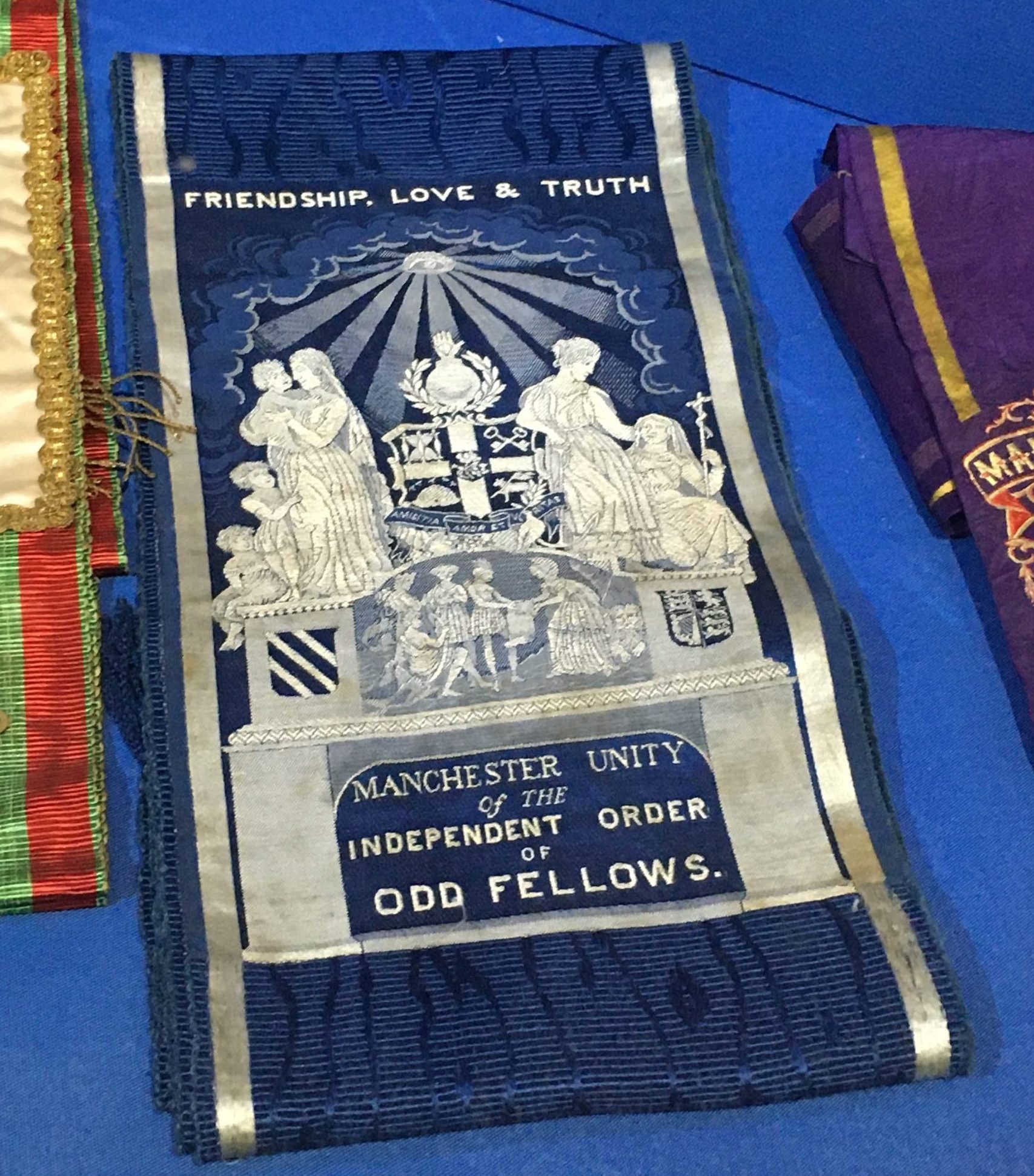 Image of an Oddfellows sash, showing the crest in the middle. Location: Main Exhibition. Image taken by CVM staff.

The arms of the Oddfellows is also depicted on many pub signs bearing that name. There was an Oddfellows Arms at 33 Commercial Place, Aberdare, later renamed Victoria Square.  An advert from The Aberdare Times, 1886, nicely describes the composition of the building and includes mention of the Club Room. 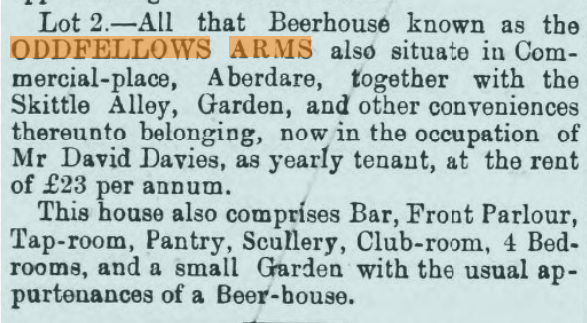 There is little written information on the subject of local friendly societies so an in-depth study of a particular club or an overview of all the local institutions would be valuable and interesting.

The Aberdare Times and other Welsh newspapers however are a rich source of information on the affairs of the societies and contain many detailed reports of their activities.

Some general information can be found in,

Dot Jones, Self-help in Nineteenth Century Wales: the rise and fall of the Female Benefit Society. Llafur, Vol.4, No1. 1984 (Available on line) 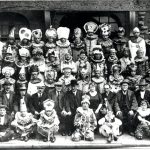 Jazz Bands of the South Wales Valleys, 1926Stories from the Collection 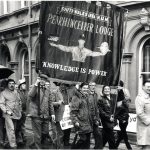 ‘Scargill Valley’: The 1984/5 Miners’ StrikeStories from the Collection