This blog post tells the story behind the message on an earthenware plate produced during the First World War.

At the beginning of the First World War, Britain was heavily reliant on imports for its food. It was necessary to import 78% of the wheat and flour and 40% of the meat needed to supply the country. Panic buying and hoarding at the outbreak of war also stripped the shops of goods.

By 1917 German submarine warfare was sinking many of the merchant ships bringing grain and oil into Britain and it became necessary to ask the population to voluntarily practice economy in the consumption of food. 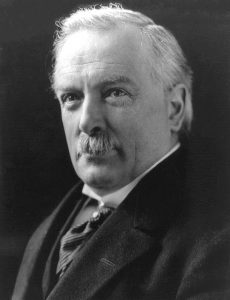 This earthenware plate has a white glaze with a message in the centre “from Rt. Hon Lloyd George, Prime Minister”. David Lloyd George was Prime Minister of the United Kingdom from 1916 – 1922. He was born to Welsh parents in 1863 in Chorlton-on-Medlock, and raised in Wales. He was the final Liberal politician to hold the seat of Prime Minister; his politics were a blend of Welsh non-conformism and radical Liberalism. He also held roles as Secretary of State for War and Chancellor of the Exchequer. In the post-war years, he was involved in the Paris Peace Conference (1919) and then the negotiation of independence for the Irish Free State (1921). Shortly before his death, he declined an offer to serve in Winston Churchill’s war cabinet. He died in 1945 and is buried beside the River Dwyfor in Llanystumdwy. Nearby is the Lloyd George Museum, which opened in 1963.

At just 20.5cm. (8”) in diameter, the plate was designed as a Bread and Butter plate for a family of ten. Its small size was meant to emphasise the need to restrict food consumption at home in order to support the war effort. 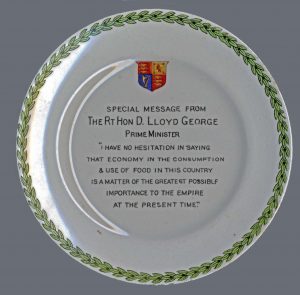 The front of the plate reads: “I have no hesitation in saying that economy in the consumption and use of food in this country is a matter of the greatest possible importance to the Empire at the present time.” (ACVMS:1991.103) 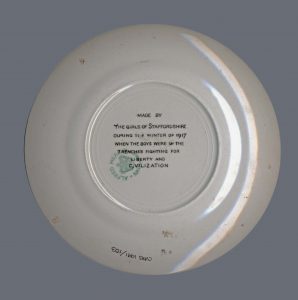 The back of the plate reads: “Made by the girls of Staffordshire during the winter of 1917 when the boys were in the trenches fighting for liberty and civilisation.” You can also see the museum’s accession number at the bottom. (ACVMS:1991.103)

The plate was made at the Alfred Meakin Pottery in Staffordshire in 1917. Alfred Meakin Ltd. was established in 1875 and operated from the Royal Albert, Victoria, and Highgate Potteries in Tustall. Alfred was the brother of James and George Meakin, who owned and ran another pottery company, J. & G Meakin. which was founded in 1851 and based in Haney, Stoke-on-Trent. The two firms shared many designs and techniques.

In January 1918 Rationing was introduced. Initially, it just included sugar but was soon expanded to other food and drinks.

After the war, some foods still remained in short supply, and butter remained rationed until 1920. 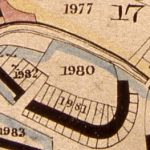 A historic walk around Aberdare town centreCommunity, Stories from the Collection 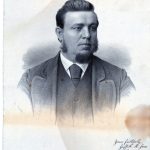