This blog post explores the history behind the use of ‘chapel china’ in Welsh chapels by focusing on objects from the Cynon Valley Museum collection.

The object which sparked this research was a teapot. Its design and style are simple. It has a clear glaze and blue details around the lid and spout, matching the blue of the name badge. The name badge which appears on the side of the teapot and the lid reads ‘Eglwys Nazareth Aberdar’ which translates to Nazareth Church Aberdare. The crest of the church is a part of the name badge and consists of a bird flying above an open book, most likely holy scripture. 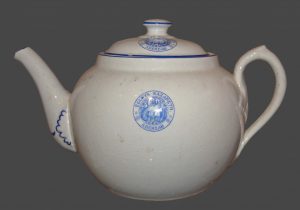 The Nazareth chapel was a Calvinistic Methodist church, a Christian group that now forms the Presbyterian Church of Wales. The Calvinistic Methodists were born out of the 18th century Welsh Methodist revival. Its beginnings can also be traced back to the efforts of Rev. Griffith Jones (1684 – 1761) the creator of circulating charity schools for the education of children. The curriculum consisted solely in the study of the Bible and the Welsh language. Subsequently, by the time he died an estimated 45% of the Welsh population had learnt to read and also acquired an understanding of the Christian scriptures. Therefore, it is said that Jones created a generation of knowledgeable people who were open to Methodist ideas.

During the 19th century, Nazareth Calvinistic Methodist chapels were built around Wales, such as Caerphilly, Ceredigion and Swansea. In 1860, a Nazareth Chapel was built on Abernant Road, Aberdare.

However, this is not to be confused with the Nazareth Baptist Chapel built in Mountain Ash in 1840. Over time this chapel became too small, and despite expansion in 1853, a new chapel, the Rhos Welsh Baptist chapel, was built in 1861.  Nazareth chapel became an English-speaking congregation and closed in 2002.

The Nazareth Calvinistic Methodist chapel in Aberdare held services for over 100 years, until 1964 when it was amalgamated with Bethania Church, Aberdare. The Nazareth chapel building closed in 1965 and since then builder’s merchants Jewsons has converted it for commercial use. This teapot belonging to the chapel conjures many stories. It is difficult to determine the age of the object, however this teapot could have featured in Nazareth chapel events and social gatherings throughout many decades.

What is the history of chapel china? And what does it tell us about Welsh religious life in the 19th – 20th century?

The history of Chapel China

Despite being a rarity now, most chapels had a set of ‘chapel china’ that was used for every day and special occasions. Today, chapels tend to use cheaper, plain crockery.

The china manufacturers would send their catalogues (Image 1) to crockery and furniture retailers across towns. This would allow chapels or individuals to choose and design their crockery sets according to their requirements. They could choose the form, shape, colour, size of the piece as well as the shape of the name badge. 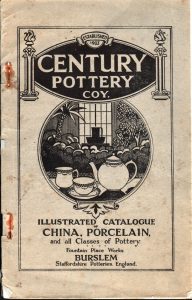 According to catalogues of the 1930s (Image 2), a dozen saucers or plates cost approximately a shilling and sixpence, whilst the cups cost a few pennies more. The jugs and teapots may likely have also cost extra due to using more materials and time.

Additionally, initial costs would have been higher, as the company would engrave a copper plate with the name badge. This would be kept as a reference for several years in case of repeat orders. This was also a good way of ensuring that a new order did not go to another company.

Image 1: The front of an illustrated catalogue used to choose and order chapel china. Image from the Cefyn Burgess collection. Permission provided by Addoldai Cymru: the Welsh Religious Buildings Trust. 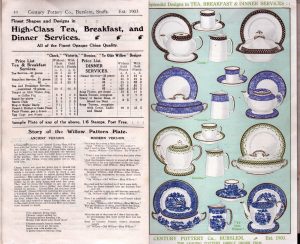 Image 2: The inside of an illustrated catalogue used to choose and order chapel china. Image from the Cefyn Burgess collection. Permission provided by Addoldai Cymru: the Welsh Religious Buildings Trust.

What do these objects tell us?

Using the various chapel china objects in the CVM collection, I will discuss the interpretations offered about local chapels in the 19th – 20th century south Wales.

The amount of china chapel that has been left for collectors or donated to museums suggests how sociable local chapels were. At CVM we have a large set on display and numerous pieces in our storerooms. This vast amount of service ware implies chapels were a social and safe place in the community. The china sets infer a reciprocation of service in which the local community would give service to the religious cause and, in turn, they would be provided with food and drink services and festivities. Thus, we can consider chapel religion as socialable and inviting. Many chapels would have represented a hub for every kind of social gathering, concert, Eisteddfod and meeting held in the parish.

For example, this plate from the Soar Chapel, Cwmaman, may have been used for many social events. The object is a plain white plate with a gold-painted edge. At the top of the plate is the Welsh Calvinistic Methodist Church crest in brown. Underneath it reads ‘Soar Cwmaman.’ Soar, Cwmaman was a Welsh Calvinistic Methodist chapel in Fforchaman Road, Cwmaman, Rhondda Cynon Taf, Wales. It opened in 1855.

The Calvinistic Methodists have been described as taking ‘a great interest in social, political, and educational matters… They support the Eisteddfod as the promoter and inspirer of the arts, letters, and music…’ In 1878, the first Cwmaman village Eisteddfod was held at Soar Chapel. Thus, chapel china, of some variation, was likely used for this important event. Similarly, let’s not forget weekly events, such as Sunday School, which would have attracted large groups and occasional events, such as tea parties (Image 3). 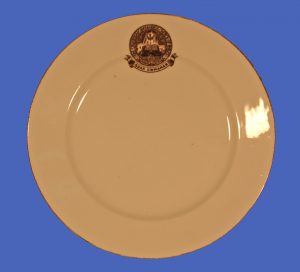 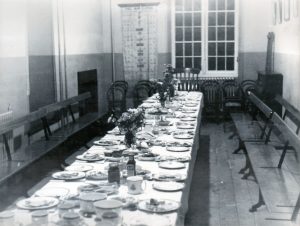 Image 3: Bethania Chapel China as displayed at a “chapel tea” in the school room of the chapel, date unknown. Image from the Cefyn Burgess collection. Permission provided by Addoldai Cymru: the Welsh Religious Buildings Trust.

Additionally, chapel china presented the identity and uniformity of the chapel and its cause. Similar to uniform, the branded china sets presented the chapel as part of an established institution. Many pieces appear like the cup and saucer from the Calfaria Rhigos Independent Chapel. Opened in 1860, this chapel acted independently of the churches of the same denomination; however, there were many Calfaria chapels, including the Calfaria Baptist chapel of Aberdare.

The Aberdare chapel, located on Monk Street, became one of the largest Baptist churches in the South Wales valleys. Both china pieces have a clear glaze and a gold-painted scalloped edge. Also, both pieces have a name badge in a light blue colour. The name badge reads ‘Calfaria Rhigos’ on a belt and ‘1926’ is presented in the middle. This style of name badge was commonplace and likely belonged to a particular production company. Therefore, this uniformity of branding and identity was common as the chapel name would not only appear on the china, but also cutlery and communion ware. 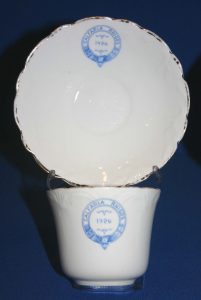 ACVMS 2009.396 A cup and saucer from Calfaria Independent Chapel Rhigos.

Furthermore, chapel china was also used to celebrate and commemorate. In many instances, decorative or intricate china pieces were made to celebrate the achievements of the cause or the memory of departed members. For example, the Siloa Chapel jug is relatively plain in appearance but includes an illustration of Rev. D. Silyn Evans. The Siloa Chapel, Green Street, Aberdare, was established in 1844. It became one of the biggest Welsh Independent chapels in Aberdare. Silyn Evans was the Reverend for the pastorate between 1880 – 1930. In 1899, Siloa had 661 members, and, in the wake of the Religious Revival, it increased to 761 by 1907. Thus, his jug commemorates the service of Silyn Evans as the Reverend and his achievements of growing and managing the congregation.

Similarly, the Primitive Methodist Centenary plate is also a significant commemorative piece. It commemorates 100 years of the Primitive Methodist Church from 1807 – 1907. The plate is very intricate and includes a decorative illustration of blue and gold paint. The illustrations include significant individuals of the cause, Hugh Bourne and William Clowes, as well as an illustration of the first meeting camp at Mow Comp, 1807. Also, there are some statistics detailed on the rear of the plate. It is titled ‘Truly What Hath God Wrought’ and includes the number of chapels (4,905), Ministers (11,53) local preachers (16,209) established over the 100 years. Thus, the history of the church is enshrined in the china piece. It is difficult to say which chapel this particular object belonged to, but all Methodist chapels in the local area would likely have been sent one as a special piece. 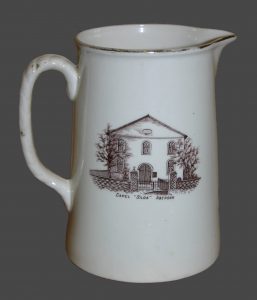 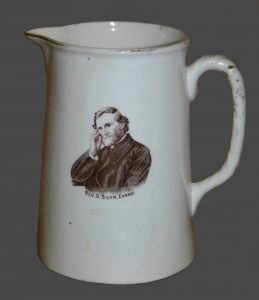 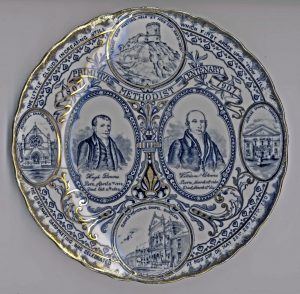 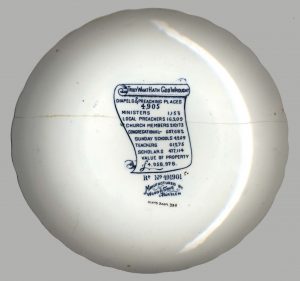 Interestingly, the decorative aspect of chapel china reflected the social standing of the chapel. Grand pieces of fine china usually belonged to the grandest chapels, especially in urban areas. They reflected the wealth of the cause and its members, as it was likely that more money was available to spend on the china sets. For example, we can see the difference in resources available by comparing china pieces from local chapels. The small teacup from the Moriah Chapel is relatively grand. It is plain white but features a floral and decorative pattern around the rim. Also, on the side of the cup is the Welsh Calvinistic Methodist Church crest in green. Underneath it reads ‘Eglwys Moriah Llywdcoedd.’ Moriah Chapel was first built in 1843, rebuilt in 1852 and rebuilt again in 1891. Moriah closed during the early 1980s and was demolished in 1988. 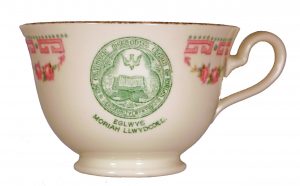 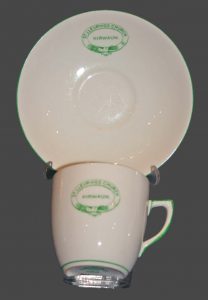 On the other hand, some chapel china was very plain and simple. For example, the cup and saucer set from St. Lleurwg Church, Hirwaun. They have a clear glaze and simple green details around the edge of the plate, bottom of the cup and handle. Also, both pieces have a name badge in the same colour green. The name badge reads ‘St. Lleurwgs Church’ on a belt and ‘Hirwaun’ is presented in the middle. St Lleurwg’s Church is located on the south side of Station Road in the centre of Hirwaun. In July 1958 it was opened by the Bishop of Llandaff and recently celebrated its 150th anniversary.

Thus, the Moriah Chapel teacup could have been produced to a higher standard due to the congregation having more members, greater income, or more social events that required a matching china set. Whereas the Lleurwg chapel may have had a smaller congregation and less need or opportunity for decorative pieces.

In summary, we have seen through the CVM collection the important cultural and social uses of chapel china in Welsh chapels. Today, chapel china is considered a collector’s item that belongs to a bygone age. However, these pieces still create a story, a sense of a community and service associated with chapels throughout the south Wales valleys in the 19th and 20th century. 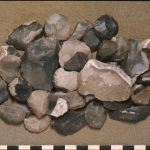