The Museum holds a significant collection of sketches by the Bacon Sisters, many of which are available to view on the People’s Collection Wales website. 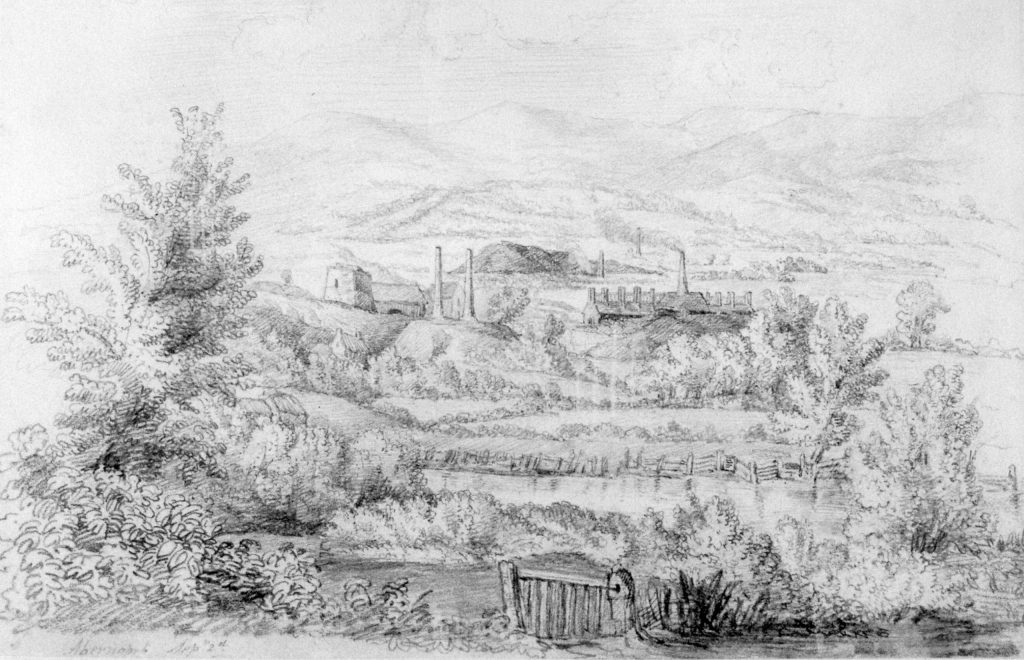 Who were the Bacon sisters?

The sketches were drawn between 1819 -1830 by Emma, Helen and Lucy Bacon, while holidaying with their uncle, Anthony Bacon II, at his residence on the Matthew Estate, Aberaman Isha (later known as Aberaman House). The sisters were the granddaughters of Anthony Bacon, (1716-1786), a wealthy English-born ironmaster responsible for Merthyr Tydfil emerging as the iron smelting centre of Britain. The sisters’ father was Thomas Bacon, Anthony’s second son, who, alongside Anthony II, inherited vast wealth from his father in 1786.

It is important to acknowledge how Anthony Bacon amassed his wealth before building the Cyfarthfa Ironworks. Between 1760 and 1766, Anthony Bacon owned five ships that completed a total of six Atlantic slave trade voyages to destinations such as Virginia, South Carolina, Maryland, and Barbados.

National Censuses had been conducted since 1801 but until 1841, we’re only concerned with statistics. Since names, occupations and relationships were only collected after 1841, we cannot trace the Bacon family, as the only person of whom there is significant information available is Anthony Bacon (1716-1786), or their father Thomas, who died in 1827. It is thought the sisters were born and lived in England. On inheriting his wealth Thomas lived in Berkshire from 1786, but was, from 1806, fully responsible for the Hirwaun Ironworks, so visited the Cynon valley occasionally. As is often the case with women’s history, there is little evidence of the sisters’ personal life.

We don’t know what ages they were, but we know they were drawing in Wales for at least ten years.

Most of the drawings available are by Emma, some by Lucy and two by Helen. There are also some attributed to “the sisters” but it is often unclear which artist did which piece. Interestingly, they all worked in the same medium, graphite, and the same style which makes distinguishing the individual artists near impossible. Few sketches included colour; one example, of the River Dee at Llangollen, is below. 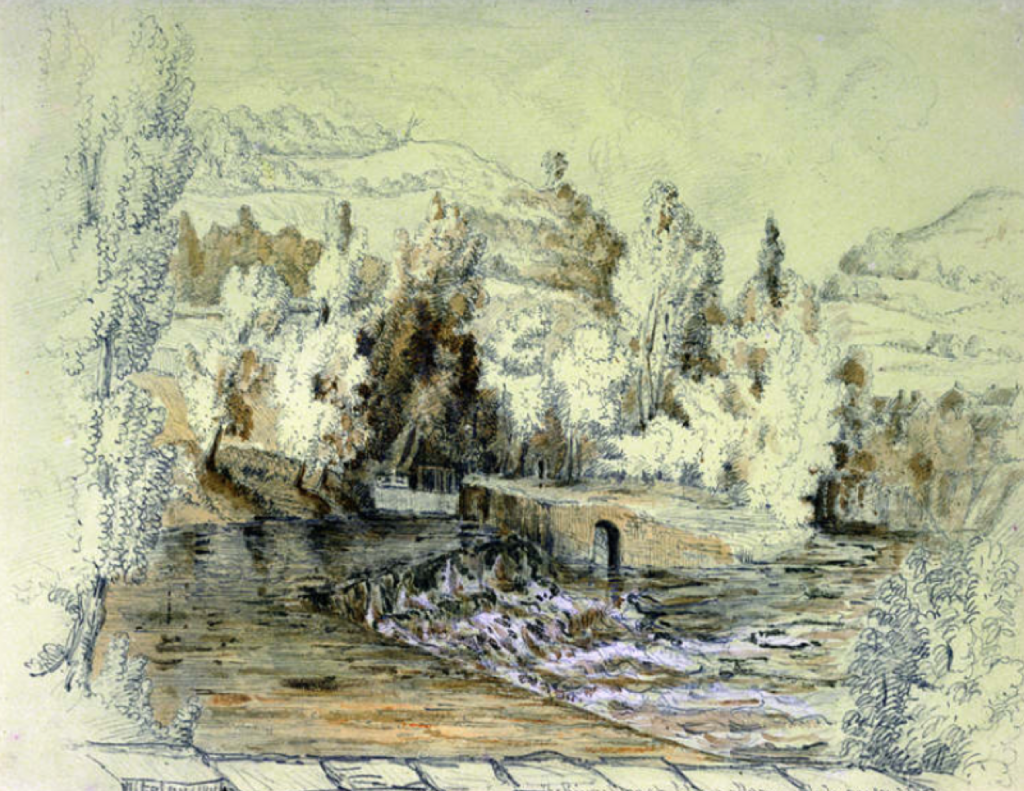 Only one drawing of those available is of a person, Richard James, a harpist of Trecynon. There is very little available to suggest Richard was a significant person; he may have been a regular visitor to Aberaman House or a family friend. This is also available to view on the People’s Collection Wales site.

The rest of the drawings are of Welsh scenes containing scenes of both north and south Wales. At the time the sisters did not realise the important contribution they made to Welsh history, documenting the landscape and development of rural areas over the 10 years they spent in Wales.

Woman artists of note were fairly rare in the 19th century. Females who lived in wealthy households would have received a complete education which would have included music and some art. But we can assume that the Bacon sisters were given specific training in drawing, considered the most important of artistic skills. Very few local women in the Cynon valley would have been in a position to spend time drawing such scenes.

As the images are detailed drawings, we have the benefit of being able to see and recognise fine details of landscape and buildings, bridges and mills. The sisters drew these scenes at a significant time, just before the industrial revolution which changed vast areas forever. If the medium had been gouache or naive watercolour, they would have been pleasant pictures no doubt but they would not have been as useful as a resource.

The Bacon sisters were doing what middle- and upper-class families did in the Georgian era tourism, visiting the same areas that are popular today, such as the unspoilt Valleys of south Wales and grand country houses. The sisters were drawing what took their fancy. At the time they would not have known that a lot of their views would transform into economically prosperous, but dark, dangerous “satanic mines and mills” for many years. 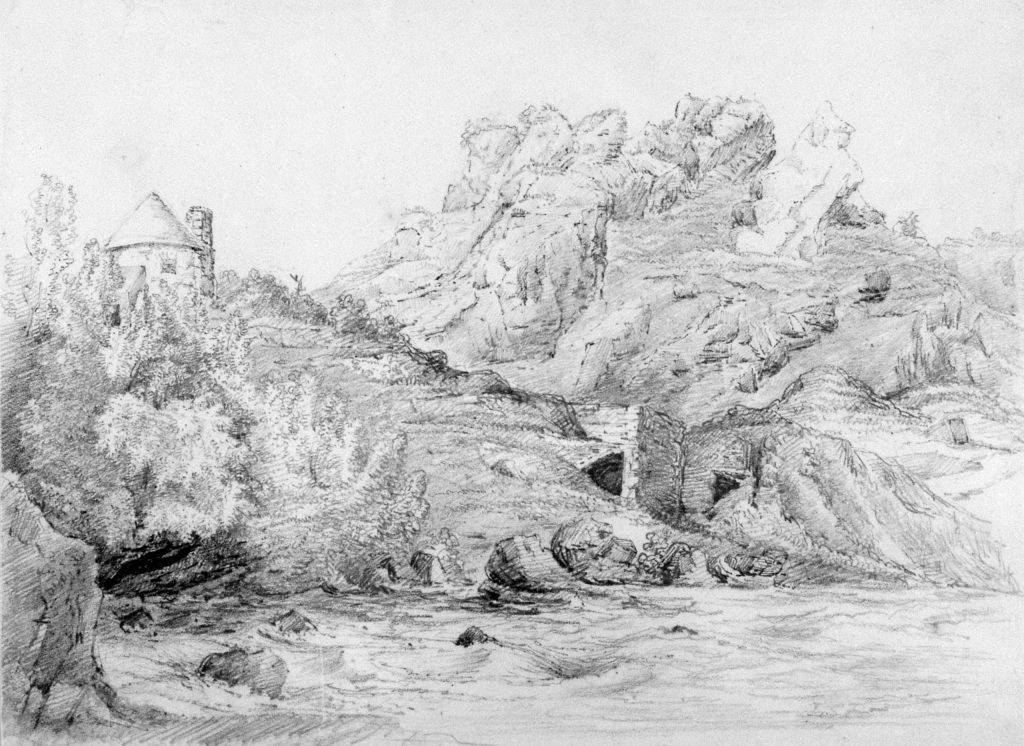 Today, post-industry, these areas have begun to return to something nearer to the views the sisters would recognise as they sketched. But the difference would be a lot more trees, houses and roads up and down the valley sides. Keep an eye out for more blog posts when we try to find the comparable views from the sketches.

Further reading on the Bacon family is available: 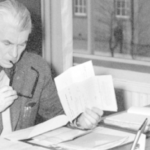