Morris Jacobs was born in 1855, in Russia, to Joseph and Hannah Morris. By the 1870s, Morris had become a naturalized British citizen and Jacobs and Sons Ltd was founded in 1874, at 4 Ffrwd Crescent, Mountain Ash. By 1884, a second shop was opened at 14 Cardiff Street, Aberdare. In the 1891 Census, Morris Jacobs is listed as pawnbroker and clothier in Aberdare, living with his wife, Julia, and 8 children. His wife, Julia Morris, was also born in Russia. They got married in 1876. The 1911 Census records the Jacobs family as living on Cathedral Road, Cardiff. Morris Jacobs is listed as pawnbroker and outfitter, two of his sons are also listed as pawnbrokers and two are listed as assistants in business. It seems that they were still running the family business in Aberdare despite now living in Cardiff. The census also records that in total they had 15 children, three of whom sadly died.

Mr Morris Jacobs became well known throughout Aberdare for being a pawnbroker, outfitter, and jeweller. Jacobs and Sons’ motto was ‘Service! Quality! And Satisfied Customers’ and boasted they were the ‘cheapest house for new and second-hand clothes.’ At first, the shop offered working men’s clothes such as Wrangler jeans and uniforms for coal mining. A few years later it became a draper’s shop. For a while, the pawn business continued from the back of the shop. Morris Jacobs and Sons later provided boys’ and girls’ school wear and sportswear. Jacobs and Sons Ltd was still trading into the 1980s, as their advertisements were still being published in The Aberdarian in 1983. However, there are photographs in the late 1980s that show the shop boarded up, as if under construction, and displaying a FOR SALE sign.

Morris Jacobs was a significant figure in the Jewish Community of Aberdare. From 1889, when the first synagogue in Aberdare was established, Mr Jacobs was confirmed as the congregation secretary. He was also elected as the President of the synagogue congregation from 1892 until 1905. In 1984, acting on behalf of the congregation, he met with the Chief Rabbi, who was on his pastoral tour of synagogues in the South Wales Valleys. Also, due to this position in the congregation, Morris Jacobs would be the person to contact about advertised positions in the synagogue. For example, one advert read, ‘WANTED, at once, SHOCHET, teacher and reader, wages £65 per annum. Apply President, M. Jacobs, 14 Cardiff Street.’ In 1902, Mr Jacobs and Mr B. Hann purchased the synagogue, after the death of the former owner of the premises, Mr Hart. This enabled the continued use of the synagogue for the Jewish congregation of the town and wider valley.

In 1925, Morris Jacobs died, aged 72, in Cardiff. His son, Arthur, had become the manager of the Aberdare shop when he returned from the First World War. The Aberdare shop closed around 1985, however, it is unclear when the original shop, in Mountain Ash, closed. 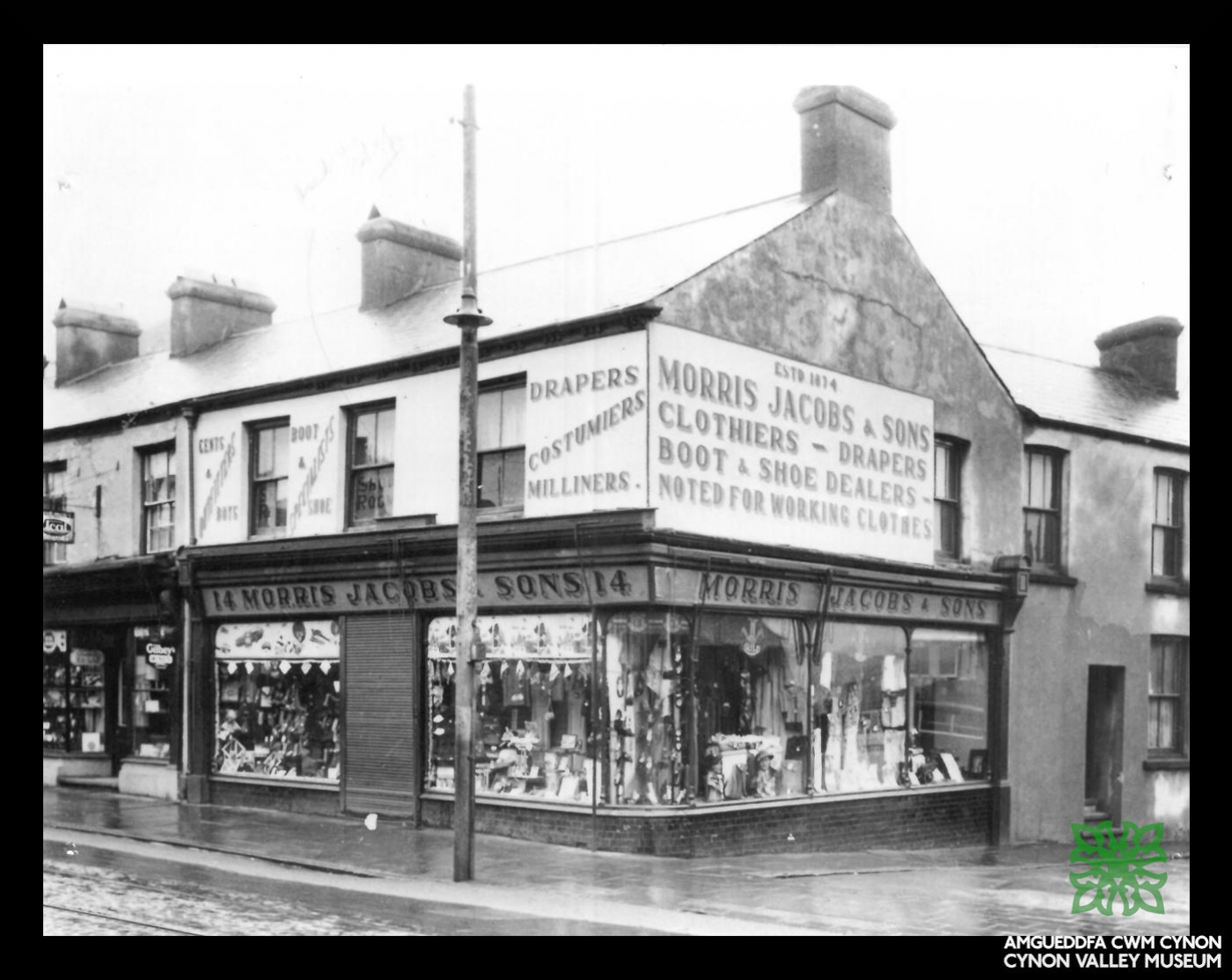 A black and white photograph of Cardiff Street, Aberdare, depicting the exterior of 14 Cardiff Street, Morris Jacobs and Sons. The shutters are down over the main entrance, which suggests this was taken after hours. There is a vast array of products on display in the shop windows. The front of the shop is printed with the text ‘Drapers, Costumiers, Milliners’ and ‘Gents & Boys’ and ‘Boots & Shoes’. The sidewall and gable of the building are decorated with the text ‘Estd. 1874 Morris Jacobs & Sons, Clothiers, Drapers, Boot and Shoe Dealers, Noted for Working Clothes. In 1982, local historian, Edward Greening, wrote how in 1924, aged 14, he visited Morris Jacobs for his work uniform for the pit. He describes that he was ‘taken to the shop of Morris Jacobs in Cardiff Street, where Mr Venmow and Mr Sidney Shimilov fitted me out with a [sic] moleskin trousers, blue flannel shirt, red muffler and heavy hob-nailed boots.’ 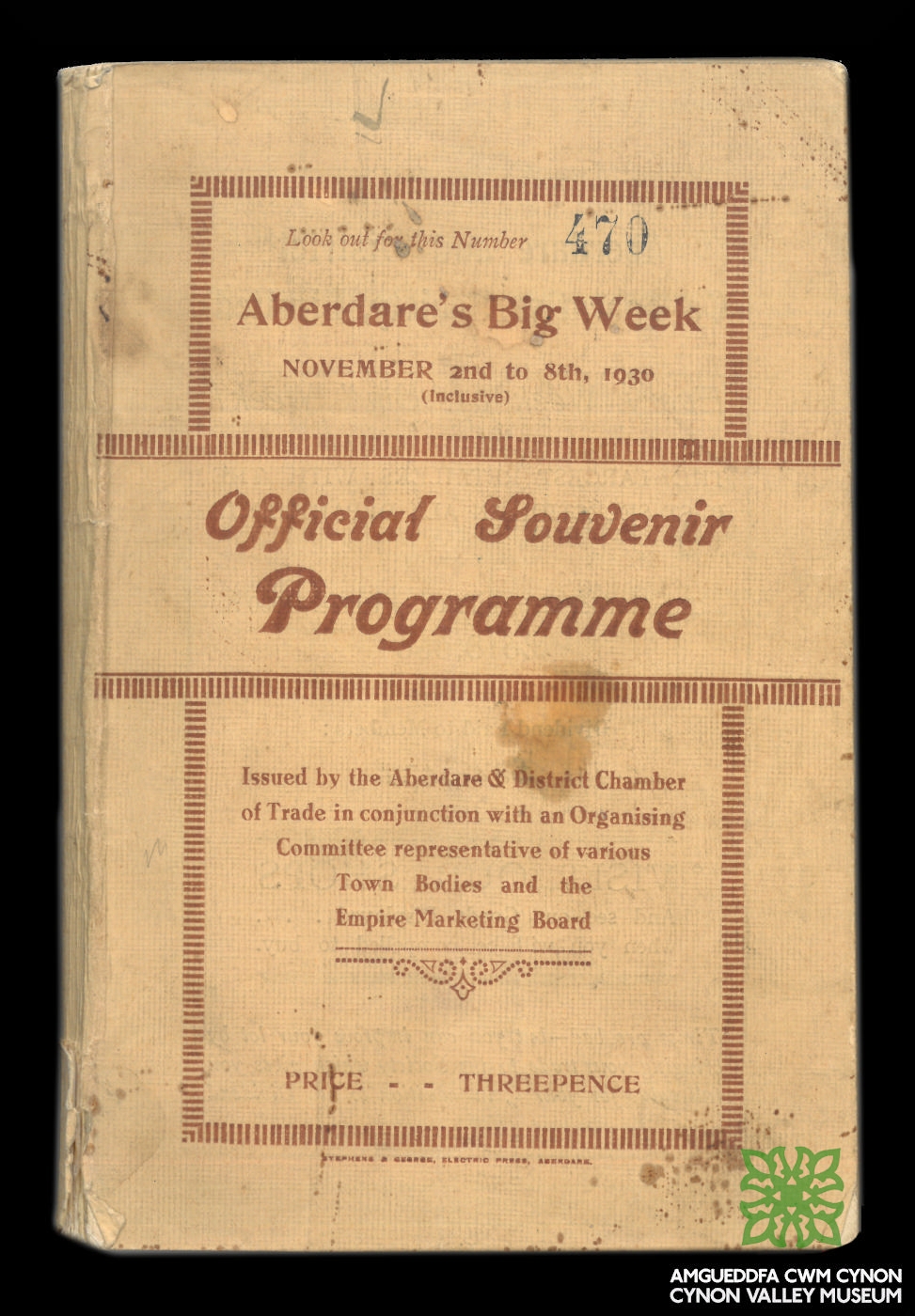 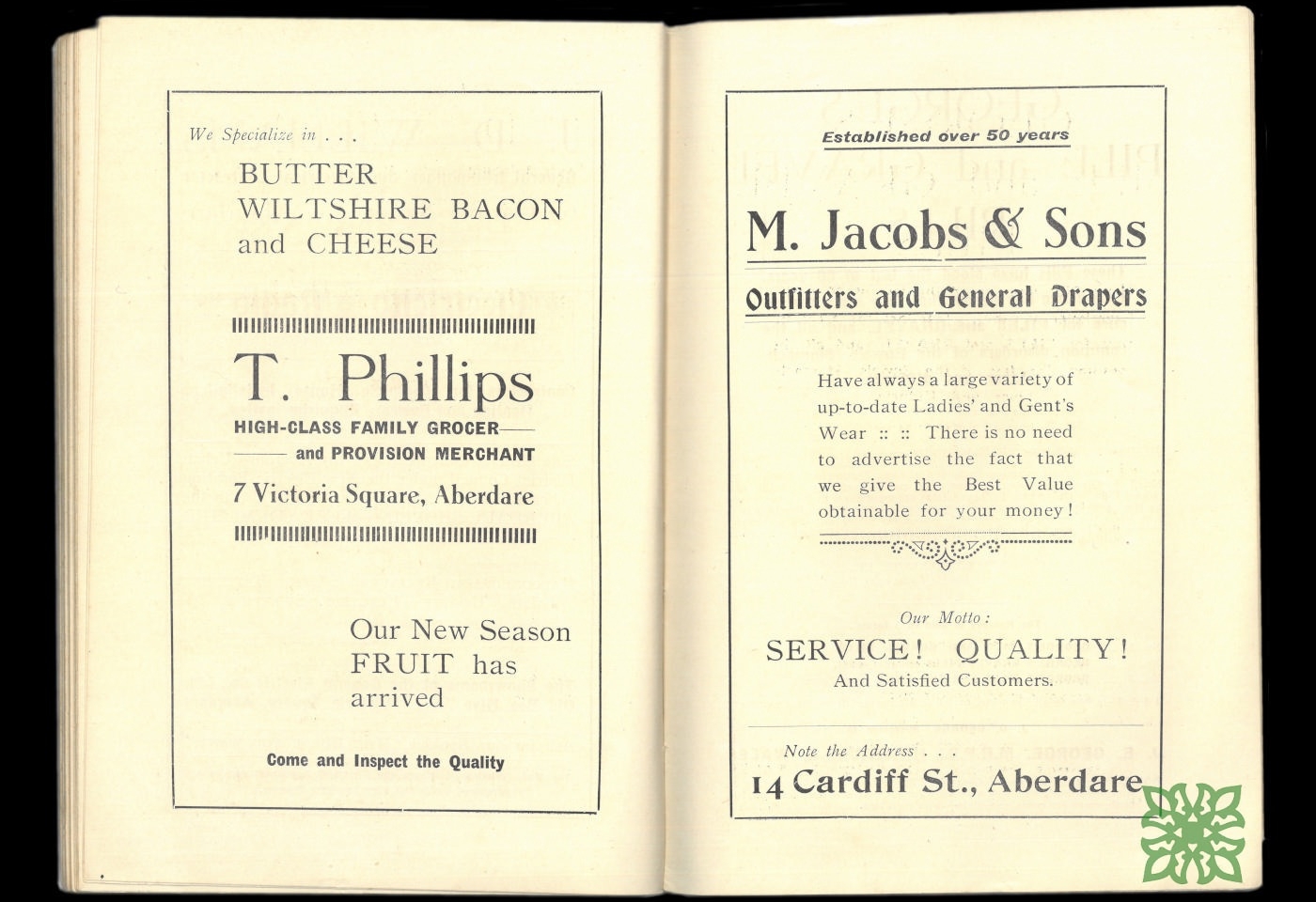 The Official Souvenir Programme for Aberdare’s Big Week, 2-8 November 1930. The book is a plain paper with standard black text. The cover states that the programme is ‘Issued by the Aberdare and District Chamber of Trade in conjunction with an Organising Committee representative of various Town Bodies and the Empire Marketing Board.’

One of the pages includes an advertisement that reads ‘Established over 50 years, M. Jacobs & Sons, Outfitters and General Drapers.’ The advertisement also boasts that they always have a ‘large variety of up-to-date Ladies’ and Gent’s Wear’ and provide ‘the Best Value obtainable for your money!’ 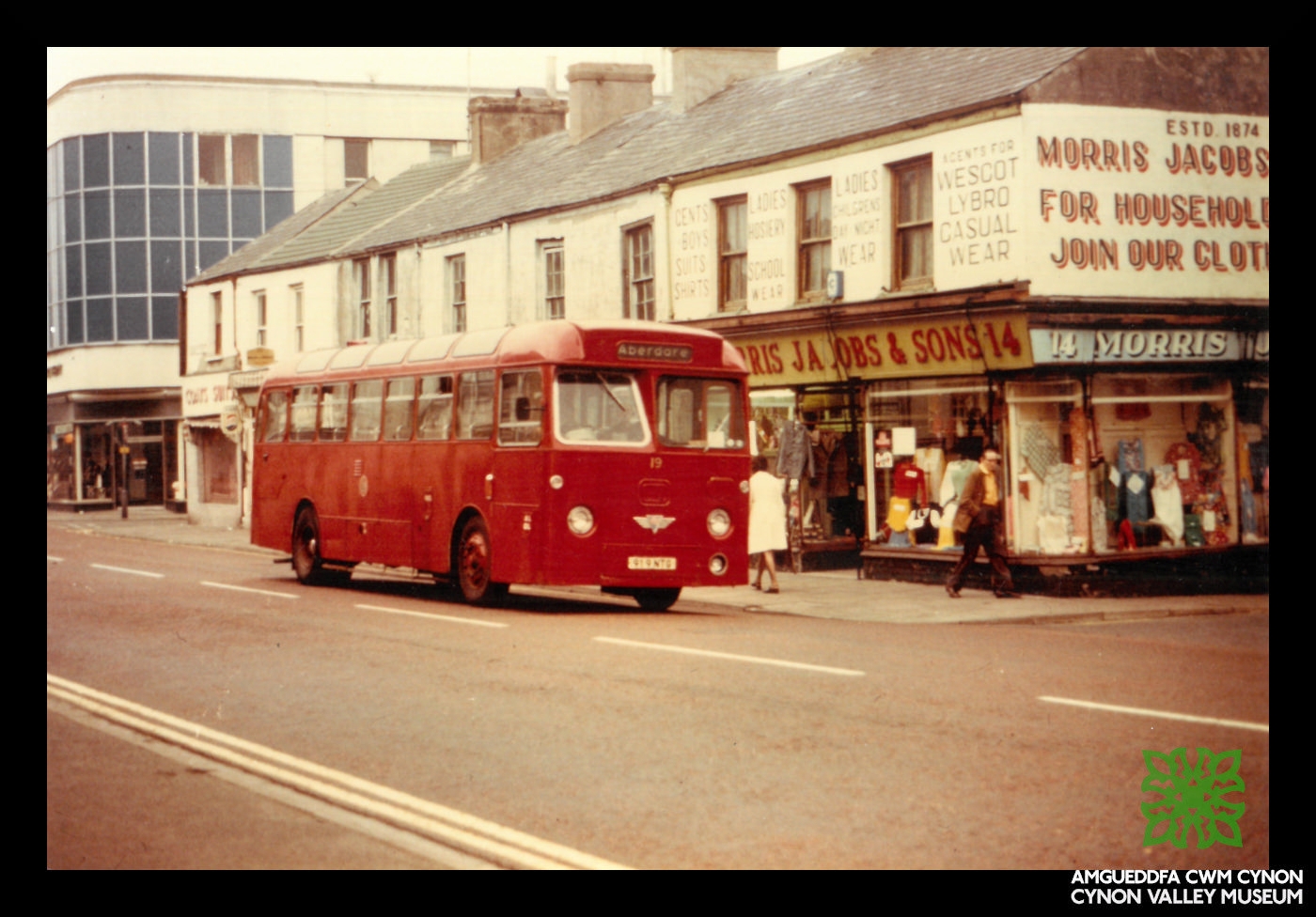 A colour image of Cardiff Street, Aberdare. The image focuses on a red bus, route number 19, terminating at Aberdare. The bus has stopped right outside 14 Cardiff Street, Morris Jacobs and Son general drapers and outfitters. By the type of the bus, it is possible that the image was taken during the 1960s, however, this is not certain.  As usual, there is a vast array of products on display in the shop windows, including brightly coloured tops, which could be either sportswear or uniform. There is also what appears to be men’s clothing or work uniform hanging in the main entrance doorway. The shop advertising is bold and would certainly stand out on the street. However, there are also signs of wear and tear. For example, the letter ‘C’ is missing from the main shopfront sign ‘Morris Jacobs and Sons 14.’