Aberdare Furnishing Co. Ltd was a popular store from which the people of Aberdare bought their furnishings, such as sideboards and chairs. Aberdare Furnishing Company Ltd came to Aberdare via Mountain Ash. In 1910, a local newspaper reported that ‘Mr Lionel Schwartz, of the Dowlais Furnishers, is opening a branch at 65 Oxford Street, Mountain Ash, as the Mountain Ash Furnishing Co.’ Thus, it seems that the business originated in Merthyn r with the Dowlais Furnishing Company Ltd. This company became ‘well known for the high standard of quality and remarkably low prices of their goods’.[1]  It is possible that the Aberdare store, on Cardiff Street, did not open until after 1919, as it is not recorded in the local newspapers up until this period. It seems that Benjamin Schwartz managed the store at 61 & 62 Cardiff Street, Aberdare and Lionel Schwartz, his brother, managed 47 Oxford Street, Mountain Ash. However, it also seems that the roots of the business stemmed from the family. In 1911, the Schwartz family were living in Merthyr. The father, Saul, is recorded as a furniture dealer alongside Lionel (aged 24); Benjamin (aged 18) and his brother Harris (aged 23) are recorded as furniture assistants.

Benjamin Schwartz was born in Merthyr around 1893, to Russian Jews, Saul and Rachel Schwartz. He was a long-standing member of the Aberdare Jewish community. He was heavily involved in the many aspects of the management of the Aberdare synagogue. For example, he supplied the fittings for the curtains in the synagogue. In 1941, he was elected as the Secretary of the newly formed Zionist Society. Also, amongst other significant Jewish individuals of Aberdare, he paid contributions to the United Appeal for Polish Jews pre-WWII (1935). The census of 1939 records that Benjamin was married to his wife Leona, still trading as a house furnisher and partnering his business with his brother. At this point, he was living at ‘Tyclyd’ Aberdare, which was next to the Freed family, who owned the successful Jewish business Victor Freed Ltd. This highlights the similar success and growth of Aberdare Furnishing Company and Benjamin Schwartz in particular.

Lionel Schwartz was born in Russia in 1887. Lionel seemed to have less influence in the Aberdare Jewish community but regularly appeared in the County Court sections of local newspapers for being sued or fined on many different occasions. On one occasion he was fined 10s. by the Mountain Ash magistrate for ‘causing an obstruction in Oxford Street’ in which ‘packing cases and a chest of drawers occupied the whole pavement’[2] outside the Furnishing Co. store. Similarly, he was also sued for damages to a customer’s pier glasses (large mirrors hung in the space between two windows). Thomas Lewis sent Lionel the mirrors for re-silvering, but he did not receive the same mirrors back. 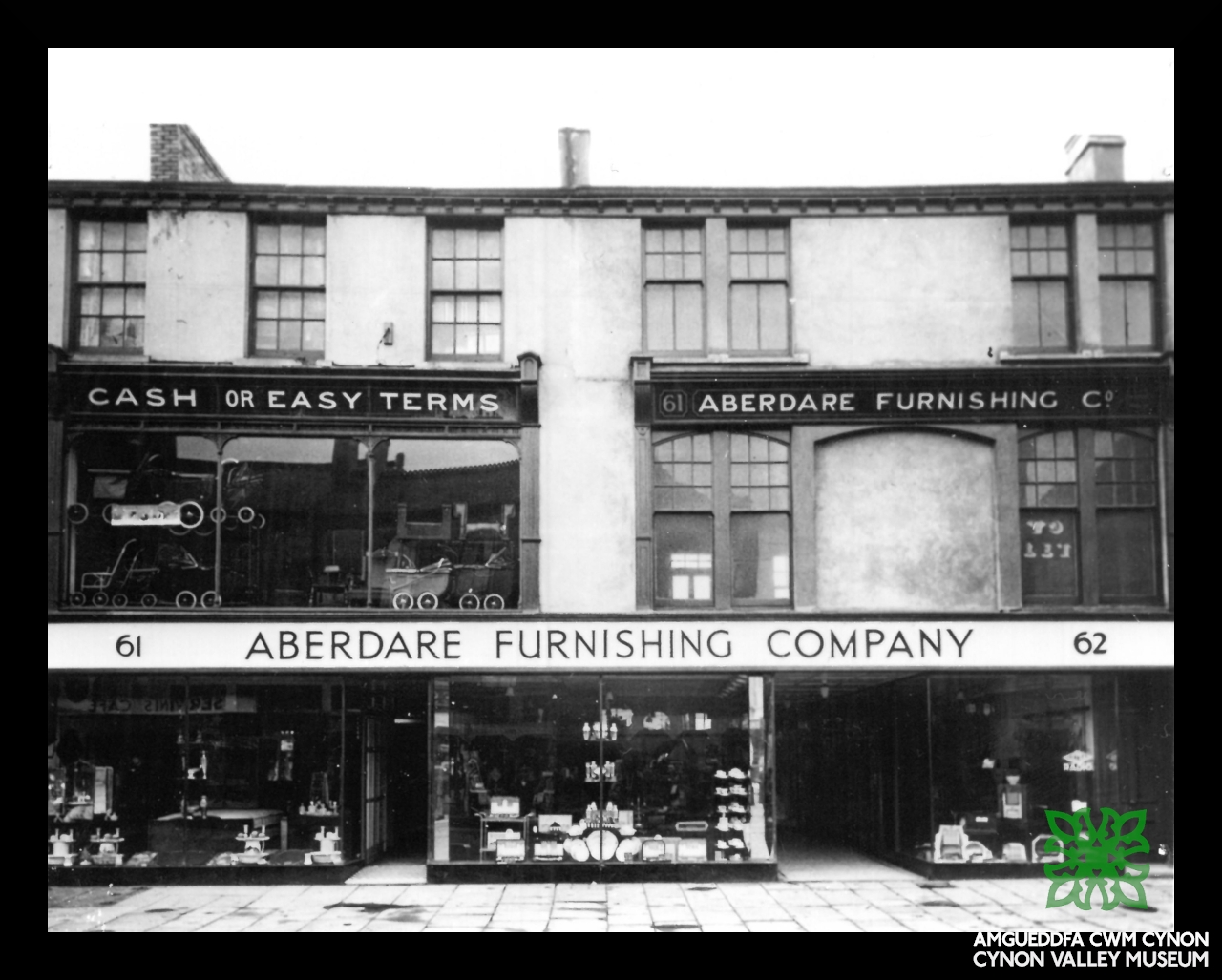 A black and white photograph, date unknown, of the Aberdare Furnishing Company store, 61 & 62 Cardiff Street. The shopfront is bold and striking in its design and the company name stands out in large black text against the white background. The store also displays the phrase ‘Cash or easy terms’ in large text. The shop windows are beautifully displayed with available products, including fine china and tea sets, mirrors and a large wooden bed frame and mattress. The store also has an extra level upstairs and the windows show numerous styles of prams and trolleys on display.

A blue paper booklet titled ‘Rent Book of Goods.’ Booklets like this were used by many businesses to allow customers to rent and use their products and pay in parts over time. This booklet belonged to Mr Vaughan of 37 Regent Street, Aberaman, Aberdare and is for the rent of products from Aberdare Furnishing Co., 61 Cardiff Street, Aberdare. The proprietors of the store are also displayed on the front; L. & B. Schwartz (Lionel and Benjamin Schwartz).

During this time, it was popular for retail products to be sold under ‘H.P. terms.’ Hire purchase is an instalment plan whereby the customer agrees a contract to acquire the product by paying an initial instalment and then repaying the remaining balance over time with interest included.

The inside page is titled ‘Money Paid’ and includes columns such as the date, the amount paid and the amount to be paid to complete the purchase. Each payment is also signed off by the member of staff who received the payment. This page includes the year the booklet was used; 1931. The total amount to be paid off from February was 15 pounds and 16 shillings, by July had decreased to 7 pounds and 18 shillings. The back of the booklet displays the ‘Chief Conditions of Agreement.’ Some of the conditions include ‘due and proper care to be taken of the Goods’ and ‘should the amount not be paid regularly the good may be removed without previous notice.’