The Jewish community in Aberdare dates from the 1860s. Slater’s Directory of South Wales for 1858/59 includes the name of Harris Freedman, and Lyons and Hyman are listed as trading in Aberdare as pawnbrokers and general dealers. There is mention of Abraham Freedman of Aberdare as a contributor to many Jewish causes between 1865 and 1874, Lazarus Caselberg between 1869 and 1874, and Solomon Abrahams in 1874. Many Jewish people played major roles in the development of Aberdare as a town; both Victor and Aubrey Freed served as chairmen of the Rotary Club of Aberdare. The heyday of the Aberdare community was in the early years of the 20th century; in 1906 the Jewish Year Book stated that there were 20 Jewish families in the town.

We have identified the locations of old Jewish businesses as accurately as possible, but please bear in mind that the town has changed over the years! 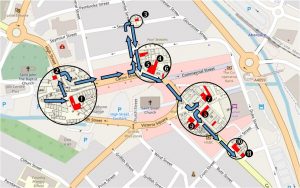 Map of Jewish Heritage in Aberdare, created by The Jewish History Association of South Wales.

Start your walk at the library. The first Jewish business on our trail was situated on the corner of Canon Street and is now an Indian restaurant, ‘The Spice Corner’ (1).  Mr. Lewis Lazarus was a furniture dealer at this property until 1893 when the Argosy Furnishing Company failed with debts of £540 16s. 7d. Creditors were called in and he was forced to cease trading.

With the Spice Corner to your right, turn to your left and you will see ‘Bradleys Coffee’ shop, formally Aberdare Town Hall; next door to Bradleys is number 27 High Street, once owned and run by Max Silverman, draper (2). Unfortunately, this business also ran into financial trouble and Max Silverman was declared bankrupt in July 1916 with a deficit of £180.18s.7d.

Proceed down Canon Street until you arrive at ‘Burton’ to your left, turn left down Whitcombe Street, cross Dean Street and then turn right into Seymour Street. Two doors down on your left, at 19a, is the site of the town’s Synagogue; a blue plaque will help you identify the exact location (3).

The Synagogue was previously the private residence of Jewish businessman David Hart and is thought to have been converted into a Synagogue around 1889. Mr. Hart died in 1902 and the local Jewish congregation, including the prominent Cynon Valley businessman Morris Jacobs,  purchased the Synagogue with work beginning in earnest ‘to rebuild the place and convert it into a proper synagogue’[1].  The Synagogue continued to go from strength to strength with a Reverend being employed and weekly services being performed as well as those for special occasions taking place. After the death of Morris Jacobs another Cynon Valley businessman, Victor Freed, took over the day-to-day running of the Synagogue, and eventually passed the stewardship over to his son Aubrey. The Jewish population of Aberdare and the surrounding areas began to drop after the Second World War and in 1957 the last service at the Synagogue was held by the Reverend S. Schlachter. The scrolls of law which had been housed at the Synagogue were returned to Israel.

On the 30th of January 2015, Rhondda Cynon Taff Council unveiled a blue plaque at Aberdare Library to commemorate the Synagogue. The plaque was then mounted on the front wall of the Synagogue, which is now a private residence once again.

The Jewish Shops of Aberdare

Now retrace your steps back to Canon Street and turn left. You will notice on your left the shop ‘Cash Generator’ at number 11; this was once a furniture dealer and pawnbroker owned by David Hart, the founder of the town’s Synagogue (4). These premises were previously occupied by Mr. Abraham Freeman, another pawnbroker. An advertisement in the Aberdare Leader dated the 12th of September 1868, announces that Mr. Freeman had moved his business from 20 and 21 Cardiff Street to 11 Canon Street. To the left of 11 is number 10, (5) a business of unknown description, run by Lyon and Hyman around 1865. Number 13 Canon Street was another Jewish-owned business, this time a watchmaker’s and jeweller’s, owned by a Mr. B Cohen in 1894 (6). The building is now an electronic cigarette shop.

Follow the road to your right onto Cardiff Street, pass the cenotaph on your right, and the former Boot Hotel to your left, and turn left into Market Street. Continue down the street until you arrive at Ladbrokes betting shop on your left-hand side. This was the site of Victor Freed’s furniture and musical shop which was opened in the 1960s by Aubrey Freed (7). The building was previously the Haggar’s Cinema known more commonly as the ‘Cosy Cinema’. 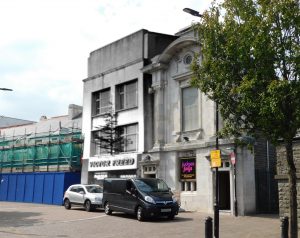 Retrace your steps back towards Cardiff Street and turn left. The first building on your left was another Victor Freed store, now a branch of the clothing chain ‘Bonmarche’ (8).  Victor Freed first opened a furniture shop on Miskin Road, Mountain Ash in 1904, which quickly became extremely popular throughout the valley. The main premises and headquarters soon moved to 1 Cardiff Street, the building you are looking at now. The Freed brand soon became widespread within the Cynon Valley, with another shop opening at numbers 57-59 Oxford Street, Mountain Ash, as well as a shop in Cardiff opposite the Castle. Victor Freed sold a vast array of goods, from furniture to mini grand pianos made by some of the best manufactures. Victor Freed was once also situated directly opposite this shop on the other side of the street at numbers 58-60 Cardiff Street.

Cross the busy road here with the help of the pedestrian crossing, turn left and notice on your right the ‘Select’ clothing shop; this building is relatively new, however, this was the site of the Victor Freed shop mentioned above and next door was another Jewish business, Aberdare Furnishing Company, owned and run by Mr. Benjamin Schwartz (9). 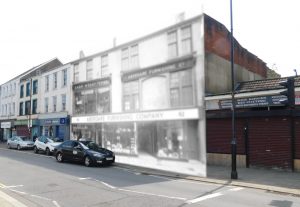 Re-cross the road by the crossing and turn right down Cardiff Street; continue down the street until you reach the turning to your left on to Station Street and cross the junction, via the pedestrian crossing. The large brown brick ‘Wilko’ building (formally Tesco), was the site of women’s clothing shop ‘Jane Cooper’ which was run for many years by Ruth and Harry Goldberg (10).  Ruth was the daughter of popular Penrhiwceiber businesswoman Ida Britz, and mother to Cynthia Kahn who went on to write an extremely good book entitled ‘Wild Water Lilies’, which documents her childhood experiences during the Second World War in and around the Cynon Valley and other areas of South Wales. 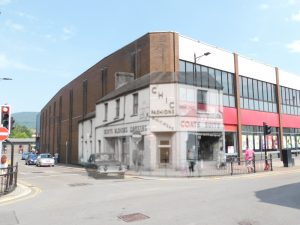 Carry on walking down Cardiff Street until you arrive at what is now the ‘Looking Good’ tanning salon at number 14, but which was once Morris Jacobs draper’s shop (11). Morris Jacobs opened his first shop, not in Aberdare, but, like Victor Freed, in Mountain Ash in 1874 as a pawnbroker. However, over time the drapery side of the business became more profitable and in 1884 Morris Jacobs opened his second shop, at this site in Aberdare. This shop became known for its wide selection of mining clothing and general work apparel. The Aberdare historian and veteran of the Spanish Civil War, Edwin Greening, wrote in his chapter ‘A colliery boy in the Nineteen Twenties’ (included in ‘Old Aberdare, Volume 2’) that he was taken to Morris Jacobs to be kitted out in ‘moleskin trousers, blue flannel shirt, red muffler and heavy hob-nailed boots’[2], on the 31st of July 1924, prior to him starting his life as a colliery boy. The shop was known throughout the valley for good quality and reliable clothes for workers of every description. In an Aberdare Leader advertisement dated May 2nd, 1908, the slogan reads ‘The only Complete Working-man’s outfitters in the District’[3]. The versatile nature of the Jacob’s store was evident in one advertisement, listing working clothes, working boots, children’s nailed boots, bedding, jewellery, and a large quantity of blankets that had just arrived.

This marks the end of the Jewish trail around Aberdare. This walk is by no means an exhaustive or comprehensive tour of all Aberdare’s Jewish history; however, it is designed to introduce the reader/walker to the ‘big players’ in terms of the Jewish heritage of Aberdare. I hope you have enjoyed your tour today. Further information on Victor Freed and Morris Jacobs is available on the Cynon Valley Museum website and on the Peoples’ Collection Wales. 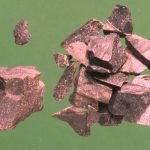 The Cynon Valley in Prehistory: The MesolithicArchaeology, Prehistory, Stories from the Collection