JACOB MORRIS: A DRAPER FOR ALL

Morris Jacobs was born in Salantai, modern day Lithuania – then a part of the Russian Empire – to Joseph and Hannah Jacobs.

In The Aberdare Leader of 9 November 1918, the family are featured in an article about the safe return of their son, Private Arthur Jacobs, who served with the 11th Welsh Regiment. The article describes how Arthur joined the army in 1914 and was sent to France where he was injured, afterwards going with his regiment to Greece and finally being captured by the Bulgarians in September 1918 and taken prisoner. Morris Jacobs’s other two sons are noted to have been in the army also, Sig. E. Jacobs and Albert Jacobs, the latter at that time was in Castle Mount hospital, Dover.[1]

Morris Jacobs died at the age of 72 in 1925 in Cardiff. His son Arthur had been the manager of the Aberdare shop before the First World War and presumably returned to that role after it ended, when the business continued to flourish. The Aberdare shop closed around 1985 but it is currently unclear when the Mountain Ash store closed its doors for the final time.

Part of the Jewish Community

Mr Jacobs appears to have been an active member of the Jewish community and in 1889 was appointed secretary of the new synagogue opened in 19a Seymour Street, which had been made available for services by Mr David Hart.[1]Indeed, there is an account in the Jewish Chronicle, 25 May 1894, of Mr Jacobs welcoming the chief Rabbi to the synagogue chambers in Aberdare.[2] In 1902, after the death of Mr Hart the synagogue was purchased by Mr Jacobs and a Mr B. Hann for the continued use of the Jewish congregation of the town and the wider valley.[3]

The Morris Jacobs draper’s shop in Cardiff Street, Aberdare, became known for its wide selection of mining and general work clothes. The Aberdare historian and veteran of the Spanish Civil War, Edwin Greening, wrote in his chapter ‘A collier boy in the nineteen twenties’, included in Old Aberdare, Volume 2, that on 31 July 1924, prior to starting his life as colliery boy, he was taken to Morris Jacobs to be kitted out in ‘moleskin trousers, blue flannel shirt, red muffler and heavy hob-nailed boots’.[1] The shop was known throughout the valley for good quality and reliable clothes for workers of every description. In an Aberdare Leader advertisement dated May 2nd, 1908 the slogan reads ‘The only Complete Working-man’s outfitters in the District’.[2] The versatile nature of the Jacob’s store was evident in one advertisement listing working clothes, working boots, children’s nailed boots, bedding, jewellery, and a large quantity of blankets just arrived.

Mr Sydney Shimilove began working at Morris Jacobs in 1929 when it was still primarily a pawnbroker. However, he remembers that shortly after he started it switched to be a draper’s shop. Mr Shimilove was often seen on the bus from Cardiff to Aberdare wearing a brown bowler hat and a smart three-piece suit. Mr Shimilove was twelve years of age when he began his work with Morris Jacobs and eventually became manager of the shop in Aberdare.[3]

The Cynon Valley Museum, holds a collection representing the history of the Cynon Valley. During research conducted by the Jewish History Association of South Wales into the Jewish community in the Cynon Valley we unearthed several items relating to Morris Jacobs, including a few deliberate and accidental photographs of the shop exterior and several advertisements in local newspapers and other literature. Below are several of these which have been digitised.

‘The Official Souvenir Programme’ for Aberdare’s Big Week; event, which took place from 2 to 8 November 1930.

The booklet is comprised of plain paper with standard black text. The cover states that the programme is ‘issued by the Aberdare and District Chamber of Trade in conjunction with an Organising Committee representative of various Town Bodies and the Empire Marketing Board.’ The individual pages scanned show advertisements for Jewish businesses operating in Aberdare; Victor Freed, advertising the sale of pianos, gramophones and furniture ‘for Mansion or Cottage’ and M. Jacobs & Sons, outfitter’s and general draper’s, advertising ‘up-to-date Ladies’ and Gent’s Wear.’

The Aberdare Big Week event was organised by the Chamber of Trade in an attempt to boost sales for the local shops. The businesses decorated the fronts of their shops, with a prize available for the winner. A baby show and flitch trials (mock trials with half a pig as a prize), were also held during the week along with a town museum created for the week. 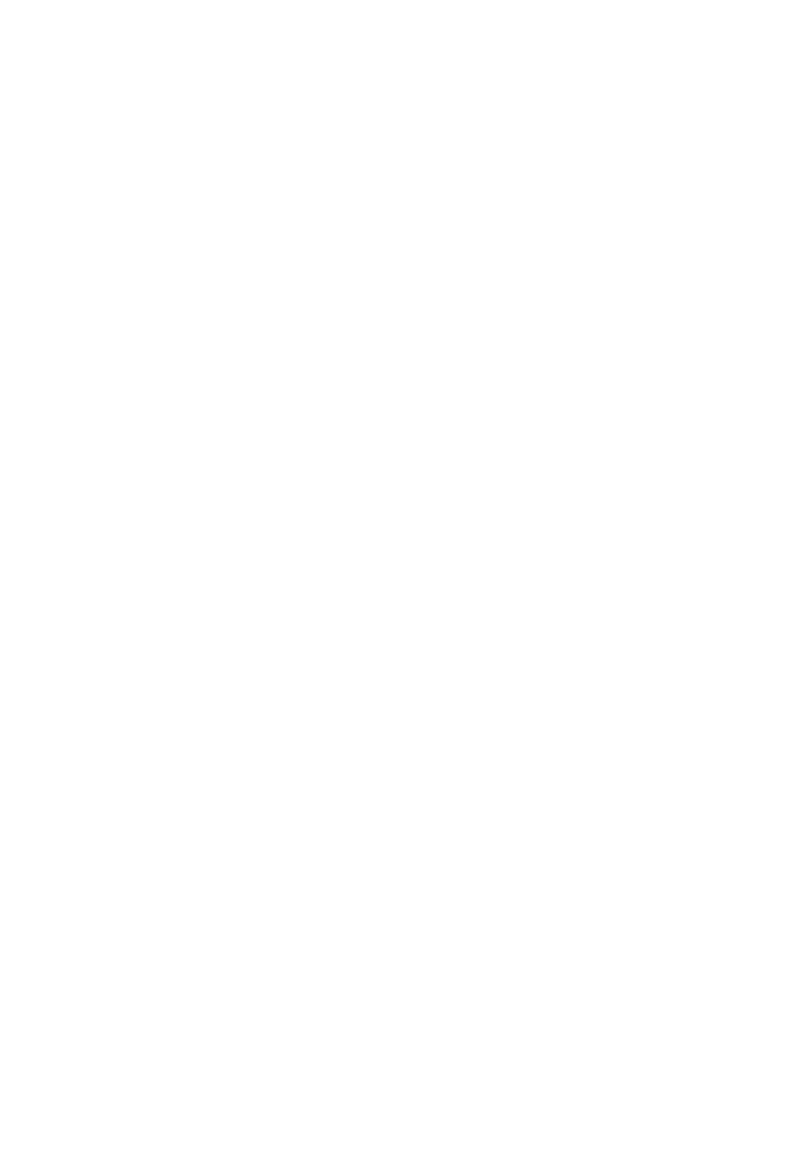 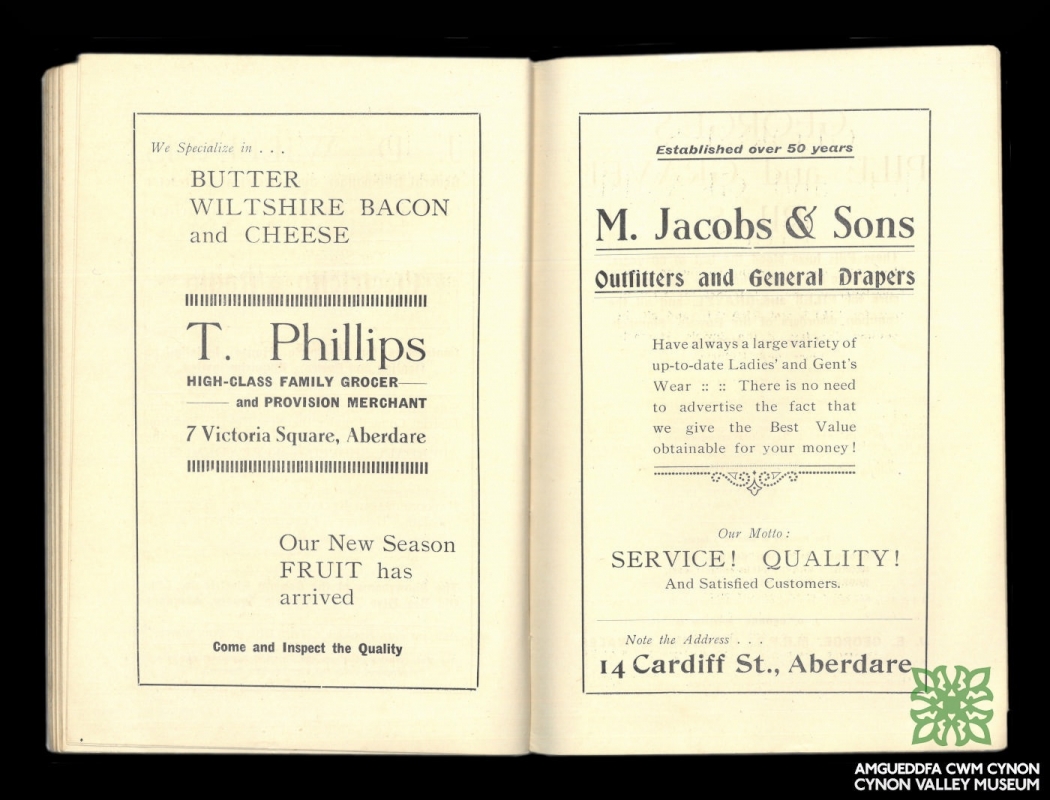 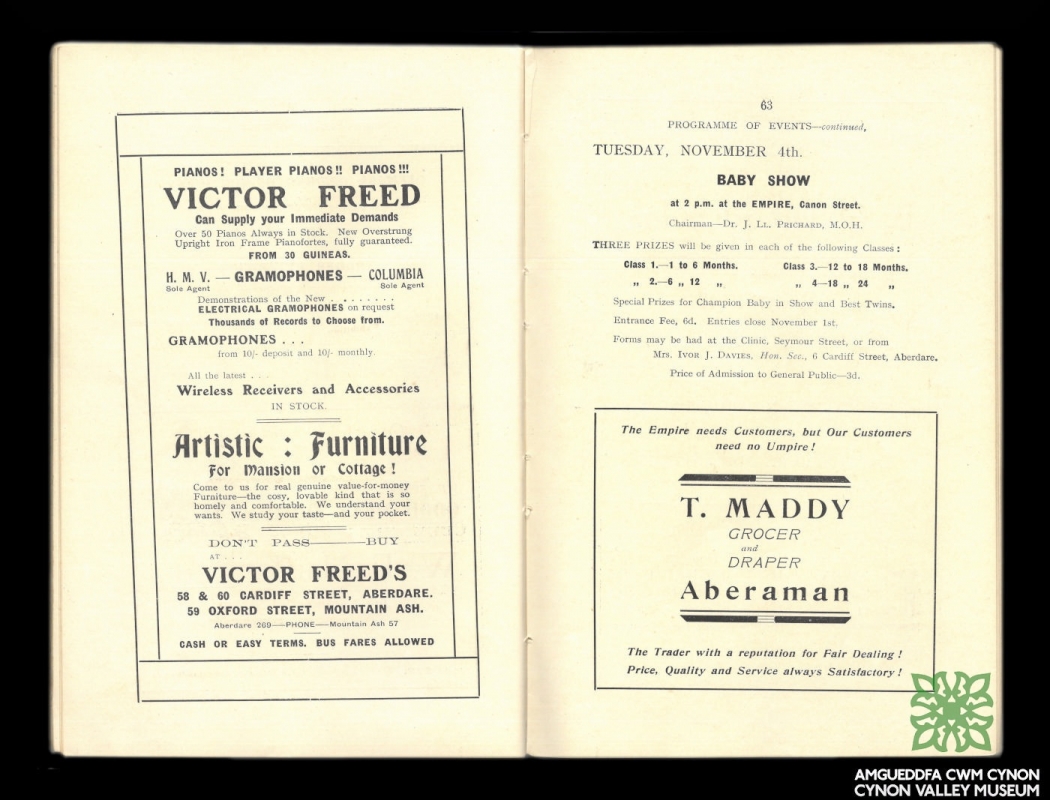 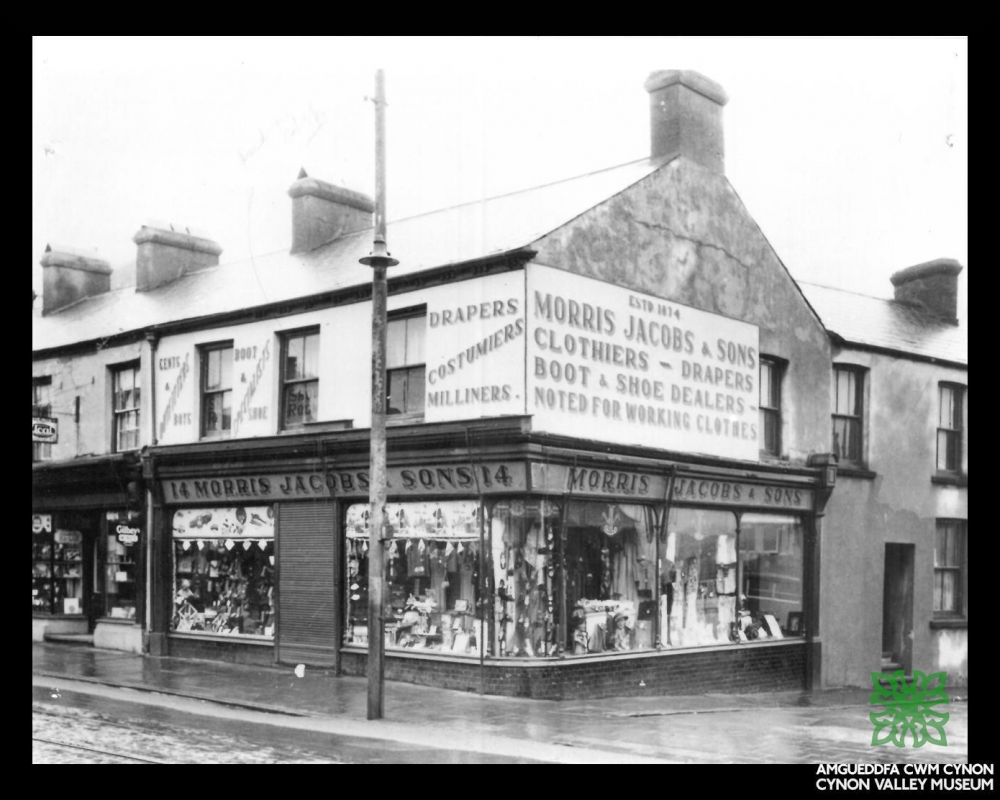 Item number two, and the first photograph to depict Morris Jacobs’s shop, is a black and white image dating most probably from the 1950s or 1960s. The shutters are down in this image suggesting it was taken after hours or possibly on a Sunday. The large lettering on the front and gable end of the shop leave potential customers in no doubt as to what they will find inside. The slogan ‘Noted for Working Clothes’ is one that the business often used; indeed, Morris Jacobs was well known in the district for its good selection of reliable and durable working clothes, as well as school uniforms in later years.

3. Photograph of double decker bus with Morris Jacobs & Sons shop in the background.

This black and white image from the 1960s depicts a Guy Arab double-decker, registration LNY 810, parked on Cardiff Street, Aberdare. Although the object of this photograph was undoubtedly the bus, Morris Jacobs & Sons shop creeps into the image in the left-hand corner. Two ladies can be seen taking a keen interest in the side window of the shop. 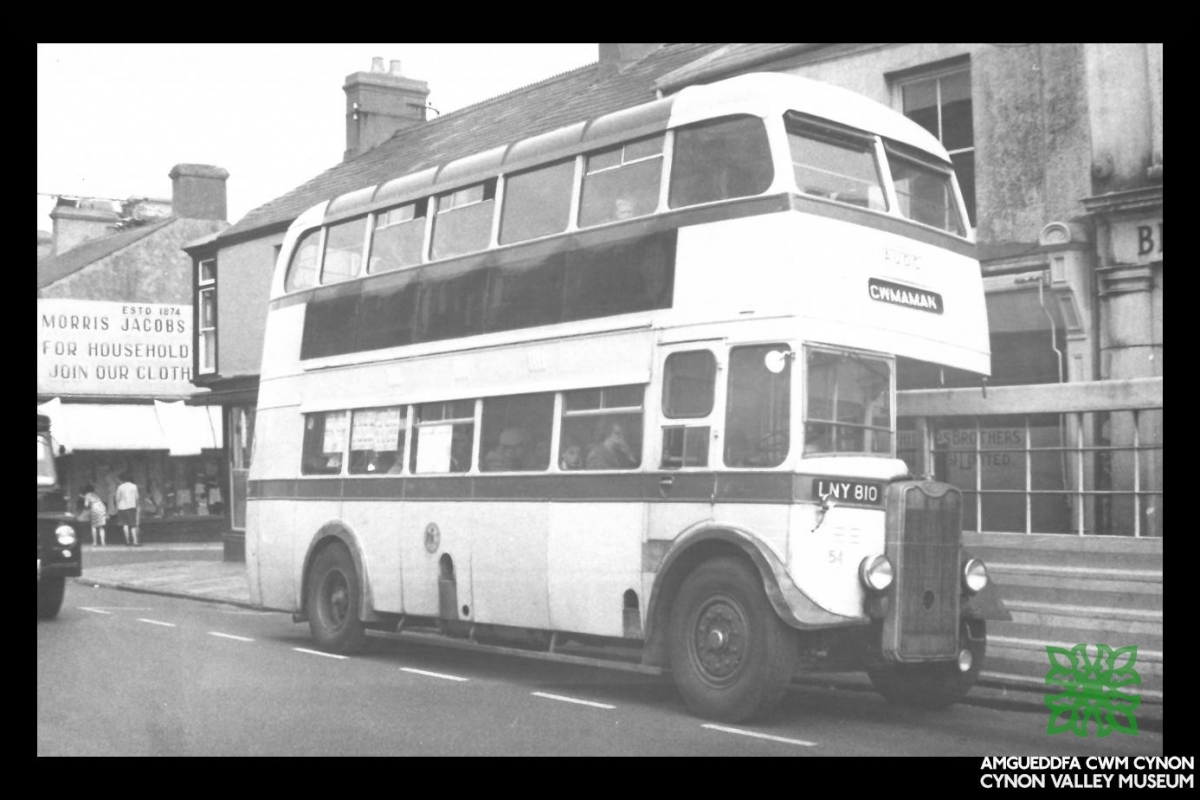 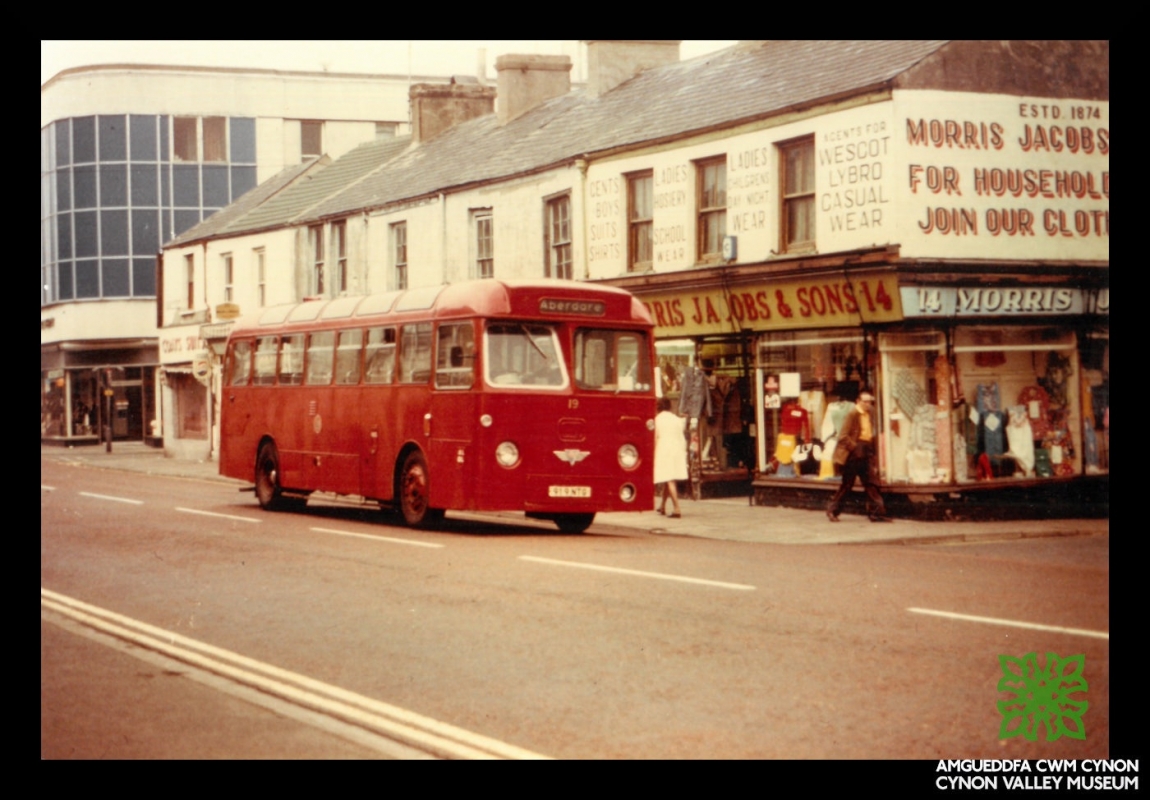 4. Photograph of a bus with Morris Jacobs & Sons shops in background

Another bus photograph, at first glance of an AEC Reliance, registration 919 NTG, making its way down Cardiff Street, Aberdare. The photograph is thought to date from the 1970s. The bus has stopped right outside no. 14 Cardiff Street, Morris Jacobs & Sons, general drapers and outfitters.  Again, the photograph is centred on the bus, but also shows the colours displayed on the front and sides of the shop, which the previous image did not.

This next photographic image of the Morris Jacobs shop has been taken from the same angle as the first photograph (object 2), however, many years later. People local to the Cynon Valley will notice in this image the Tesco building (now Wilko) has replaced the smaller shops on Cardiff Street to the left of Morris Jacobs. The image shows the shops exterior looking worn and somewhat uncared for and the ‘For Sale’ sign suggests the date would have been in the mid- to late-1980s. The bare window displays, and grubby windowpanes suggest the store has been closed for some time. Note the small gate across the entrance doorway and a small white notice to the left of the main door. Could this be a note explaining the store’s closure? 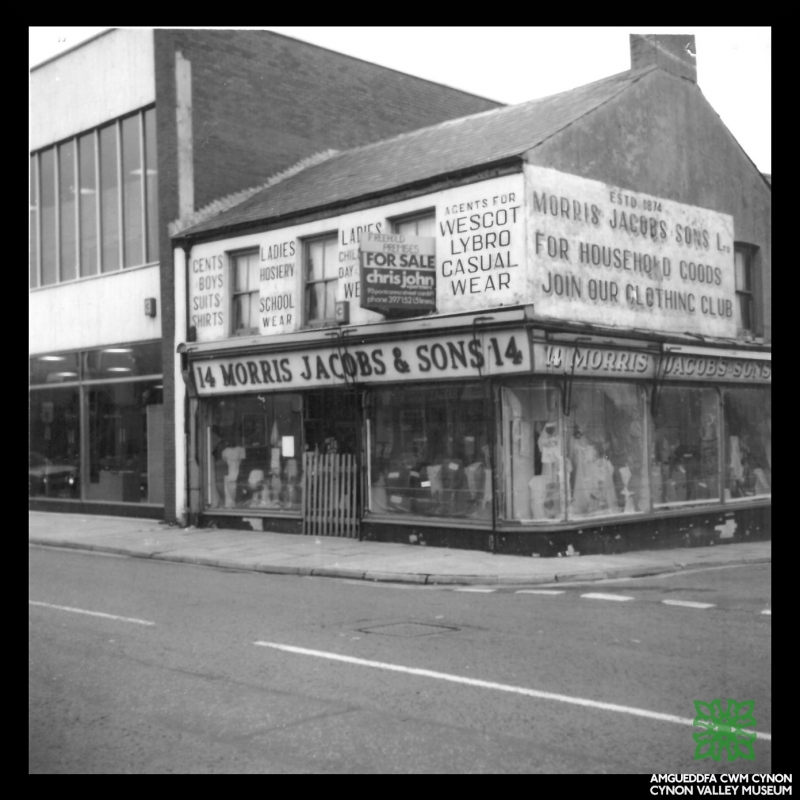 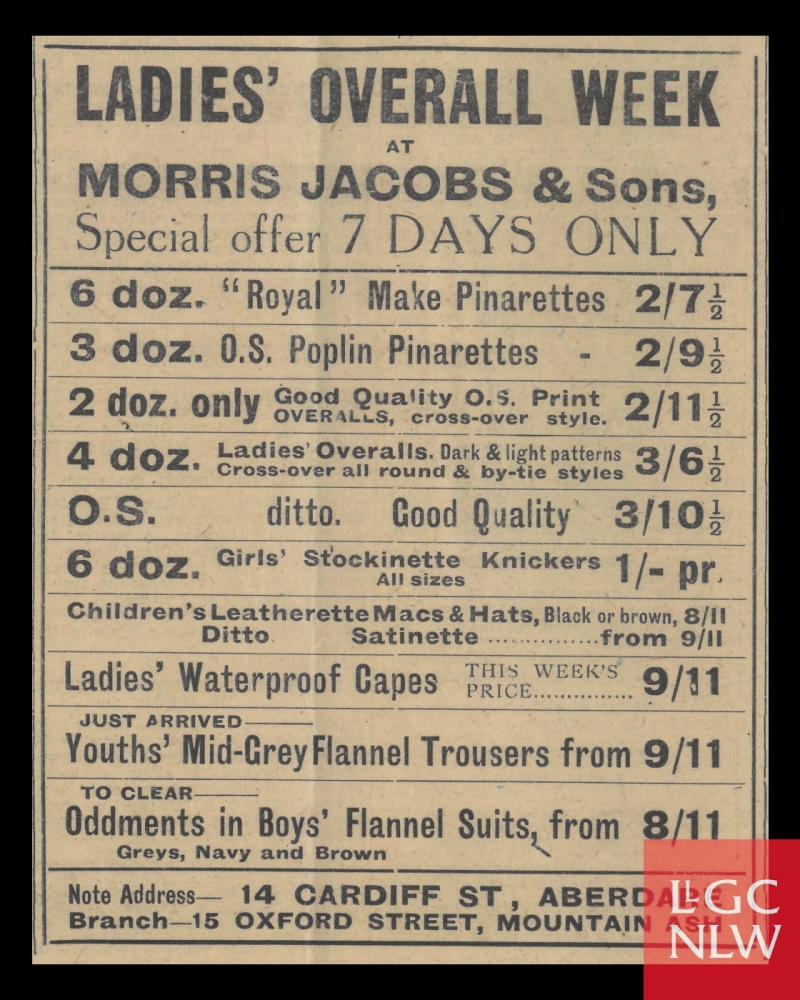 An advertisement for Morris Jacobs & Sons, which was published in The Aberdare Leader during the Second World War, on 4 April 1942. This advert is aimed at the women of the Cynon Valley with the strapline ‘Ladies Overall Week at Morris Jacobs’. The pinarettes (or pinnies) are advertised by the dozen which suggests they were aimed at local businesses who employed female staff, which they did more of during war time.

This page from the Aberdare Leader a week before Christmas 1948 features a small advertisement for Morris Jacobs. Interestingly the advert concerns itself with items for women and children. Mentions of cardigans, gloves and jumpers are intended to catch the ladies’ attention while Welsh shawls and reduced priced toys are available for the children. 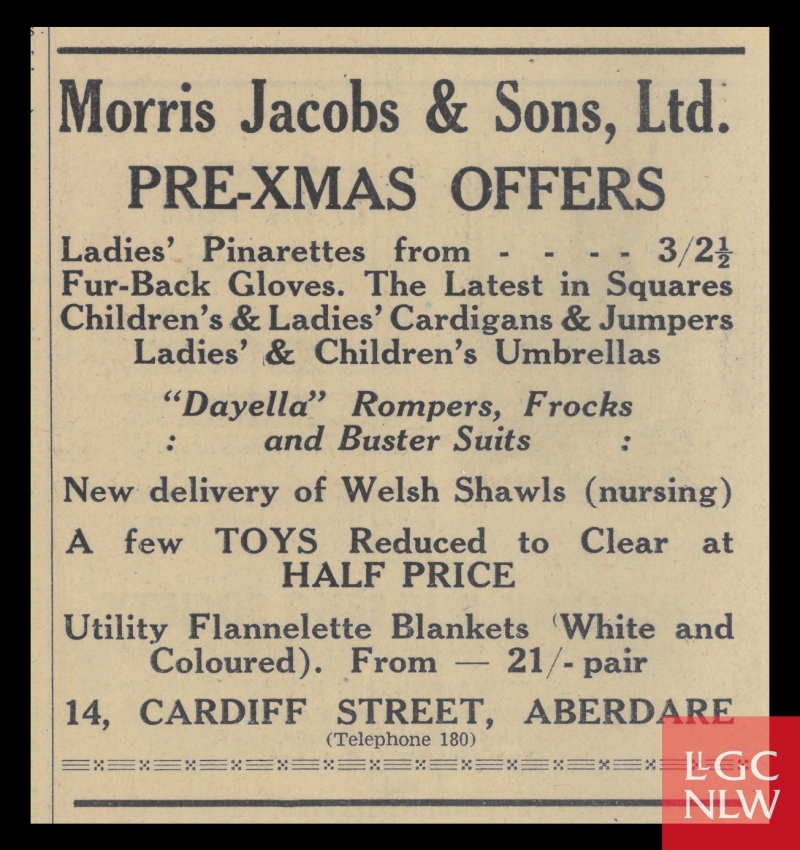 “Morris Jacobs: A Draper for All” has been curated by Geraint Lewis, JHASW volunteer

With thanks to Rhian Hall, who contributed the objects’ descriptions, and Geoffrey Evans for his contribution to the Aberdare Big Week item.